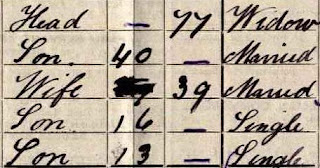 The 1911 census for England and Wales is now online (or at least, 80% of it is), and the site appears to be coping well with demand. I'm mostly delighted by this, but there is one fly in the ointment.
First, the good news. The records are fully searchable, leading to discoveries unlikely to be made browsing through paper copies. For example, one of my great-aunts had left the village she was born in (and to which she would later return) for Birmingham. She was domestic servant to a butcher and his family. A woman from the same area was working for the same family as a butcher's assistant, which suggests that Great-Aunt Charity found the job by word of mouth.

1911 is also the first census for which the original returns have been preserved. That means that you can see the original entries in the occupier's own writing. It's nice to know that my great-great grandmother had really neat handwriting; and perhaps surprising that she couldn't spell 'Ebenezer', her own son's name!

The downside? Simply, the cost. You might want to search sparingly since each original page image - just one household - costs up to £3.48. It is a beautiful, sharp, colour image and the digitisation process is expensive. However, this pricing rather discourages browsing through even small local areas, let alone checking multiple records to track down a person with a common name. If you do want to find more than a few records, the site's blog suggests that a subscription option will become available later this year.

Email ThisBlogThis!Share to TwitterShare to FacebookShare to Pinterest
READ MORE ABOUT edwardian, feminism

Not that surprising - the returns were filled in by enumerators rather than by the people themselves. They often made mistakes in exact spellings of people's names.

Clare, for earlier censuses, you're right that the enumerators' returns are all that survive. However, the 1911 census site shows the household schedules, ie the actual census forms filled in by the people themselves. On the one with the spelling mistake, the correction by the enumerator is also visible! As the site info puts it, 'you can see the census documents filled out in your ancestor’s own hand (complete with mistakes and additional comments)'.

No, I'm surprised they haven't publicised that aspect more (too busy talking about David Beckham's great-great-grandfather!). There's also more information than on previous censuses - all very exciting once you find out about it!

That's kind of intriguing! I got sidetracked the other night looking at the older census, before I even knew the 1911 was out. I couldn't find my grandparents, alas. And I did wonder why the big pound sign suddenly popped up...unsubtle! *grin*