After the Romans left, London shrank back only to return to prominence in the middle ages. William the Conqueror built the Tower of London, Westminster Abbey and Westminster Hall, as well as several now-disappeared castles. The city became England's capital in the thirteenth century; London grew, and churches, hospitals and monasteries prospered. It was governed by aldermen and a mayor - the most famous was Dick Whittington - while the guilds controlled its trades and industries. The river, an important centre for trade, got its first stone bridge; Southwark grew up at the southern end. Westminster, originally a separate town to the west, joined up with the City by the end of the mediaeval period.

However, London also underwent upheavals including the Peasants' Revolt, the expulsion of Jews from England in 1290, and plagues. A growing population in a confined area brought problems of pollution and sanitation. The Black Death killed about a third of the population in 1349 and would keep reappearing until 1665. 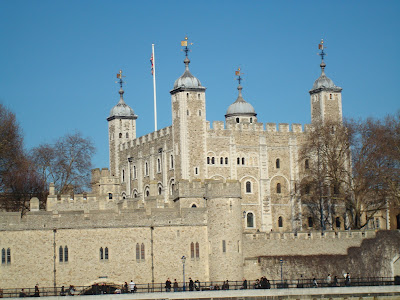 Tower of London
Once London had submitted to him, William the Conqueror lost little time in building strongholds to protect his position in the city. The first defences on the site were replaced by the White Tower in the 1070s; its masons and stone came from William's native Normandy. Its primary purpose was to subdue the unruly and untrustworthy inhabitants of London; use as a defence against invaders and as a royal residence would come later.

In the thirteenth century, King John further fortified the tower and used it as a home. He probably also introduced the first menagerie, keeping lions and other exotic animals. His successors continued to extend and fortify, as well as keeping prisoners, state papers and the royal mint here. The Wars of the Roses saw it used as a place of celebration for victors and of execution for losers.

This mediaeval core survives, although there have been further expansions and changes of use throughout the Tower's history. Today's tourists are taking part in a long tradition: the first recorded guided tours were in the 1590s and a ticket office was installed in 1838 - complete with refreshments and guidebook for sale.


Temple Church
Westminster Abbey might be a more obvious choice - William the Conqueror was crowned there within months of the Battle of Hastings; Henry III rebuilt it with reconsecration in 1269 - but I'm going to suggest going off the main tourist track a little. (Not too far: there has been something of an influx of visitors since the church featured in the Da Vinci Code). Now in the heart of legal London, this unusual building was built by the Knights Templar in the twelth century. The oldest part is circular, designed to remind those crusading solider knights of the Church of the Holy Sepulcre in Jerusalem. It was further extended ready to accommodate the body of Henry III, who had expressed a wish to be buried there, but by the time he died he had changed his mind and was buried in Westminster Abbey.

Although the church now serves lawyers, the knights are still present - as stone effigies. While they lie alert, eyes open, swords in hand ready to fight again, their order is gone. It was abolished by the Pope in 1307, at the instigation of those jealous of the Templars' great wealth. Edward III gave Temple Church and the surrounding land to the Knights Hospitaller, who rented it out to lawyers: the origins of Inner and Middle Temples still there today. When the Hospitallers were themselves disbanded as part of Henry VIII's dissolution of the monasteries, the church came into state control; James I would grant a charter to the Inns of Court giving them use of the Temple in perpetuity, on condition that they maintain the church. That charter is still in force today. 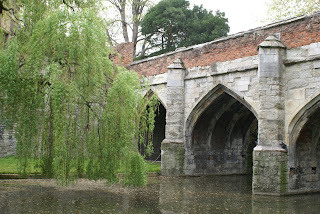 Eltham Palace
Arguably, I'm cheating here since Eltham was well outside the mediaeval city limits. However, it was no rural backwater but an episcopal, and later royal, palace. The earliest surviving remnants were built by Anthony Bek, Bishop of Durham, around 1300 and Edward I was a frequent visitor. Bek lived there until 1311 although he had given it to the Prince of Wales in 1305. Edward II grenated the manor to his wife; Edward III spent much of his youth there. That strong royal connection spanned three centuries, and Henry VIII spent his childhood here. The mediaeval bridge and Great Hall, built by Edward IV in 1475, survive; an Art Deco house, and gardens in the moat, were added by Stephen and Virginia Courtauld in the 1930s.

Also worth a visit: Winchester Palace in Borough is the remains of an episcopal palace. The bishops who occupied it had a very dubious source of income: they controlled the Bankside stews (brothels), whose women were known as 'Winchester geese'. The Black Friar pub marks the site of the mediaeval Blackfriars monastery - its decoration is cheerfully inauthentic but absolutely wonderful (not to mention the reasonably-priced food and selection of real ales). For more authentic relics of the period, go to the Museum of London whose treasures include the everyday (shoes, loaded dice) and the expensive (a gold crucifix containing a supposed fragment of the true cross).