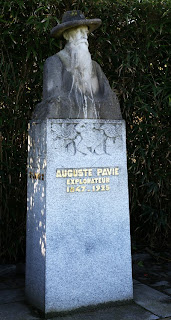 There are some statues and memorials I've made a special effort to see (Bazalgette's, for example). There are others which are famous in their own right, such as Nelson's Column.

However, we all pass many more statues by chance, and often have little or no idea of whom they represent. This series is dedicated to those, and to finding a little more about their subjects. We're beginning with one I happened across on Christmas day in the Jardin des Anglais, Dinan.

Auguste Pavie was born in Dinan in 1847 (although he grew up in Guingamp before enlisting in the army at the age of 17) and was, as his statue says, an explorer who travelled extensively in Indochina. He had served for some years in Cambodia during his army service, during which he immersed himself in the local language and culture, and returned only intermittently to France during the rest of his career. However, unlike many more maverick travellers, Pavie was also a diplomat and senior civil servant. He was an active colonialist, hardly surprising for one in his position in that place and time, although he did prefer the 'conquest of hearts' to the use of military might. Luang Prabang became a French protectorate after Pavie himself rescued the king from bandits who were sacking the small kingdom. Nonetheless, he was also involved in the Franco-Siamese War which saw the whole of Laos become a French protectorate and Pavie its governor.

Photograph of Pavie in 1890 from Wikimedia Commons.

Email ThisBlogThis!Share to TwitterShare to FacebookShare to Pinterest
READ MORE ABOUT Brittany, statue