This week is going to be dedicated to the newly-reopened East London Line. (Don't panic if trains bore you to tears: we'll get canals, museums and ghost signs too!)

Today was the official opening - the northern part has of course been open for a while unofficially - and I took the first train from New Cross before heading down the brand new section to West Croydon. At ten in the morning, there were more media and TFL people than genuine passengers on the platform. 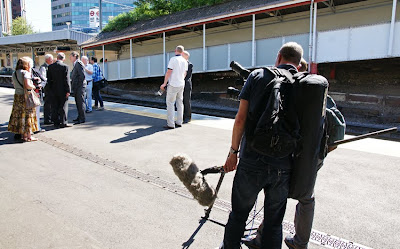 As the day wore on, the trains got fuller. This may be because
(a) most people are sensible enough to have a lie-in on a Sunday morning;
(b) word of the 10,000 free tickets got around; or
(c) they were oases of air-conditioning on an insanely hot day.

Whatever the reason, everyone seemed to be enjoying the new service despite the complexities of three southbound destinations (New Cross, Crystal Palace or West Croydon) and the panic engendered by pre-recorded announcements for 'Arkly Station' (later corrected to 'Brockley').

Odder moments included an on-board 'performance' which made little sense - even less after reading the accompanying handout - but did look very decorative. 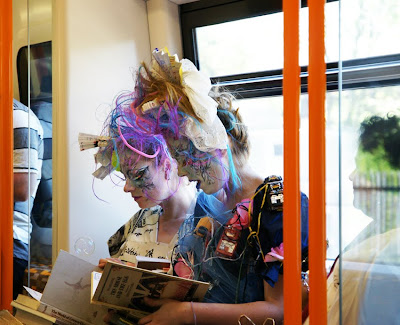 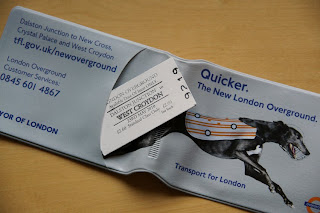 Now home (and missing the air conditioning already), I have not only memories and photos but also a souvenir ticket and travelcard holder. We obviously won't get that sort of service every day, but the ELL certainly won the hearts of many Londoners today.