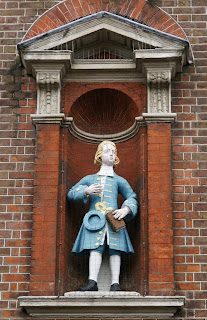 I've posted before on the model children found on the facades of charity schools (looking at examples in Rotherhithe and Hatton Garden). They served to show that the building was a school and to advertise the uniform, usually provided to the child and better than any clothes she currently possessed.

On a Victorian Society walk through Docklands this weekend, I saw several more examples. Raine's School was established in Wapping in 1719; its premises have moved a number of times since, and these figures accompanied several of those moves before returning to the original school premises. Between them is the rather austere motto, 'Come in and learn your duty to God and man'. 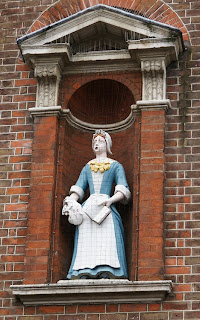 The school was founded by brewer Henry Raine, for fifty boys and fifty girls. Boys learned reading, writing and arithmetic before being apprenticed at age thirteen. Girls were taught reading, knitting and sewing; they generally left at the age of ten, but each year ten of them would be selected to continue to boarding school.

The boarding school sounds utterly miserable: the girls were to earn the salaries of their mistress and cook by sewing and knitting; the outer gate was kept locked and the girls not permitted to leave even on errands; no contact was allowed with families except on four one-day holidays a year. After four years of this regime, girls became apprentices or servants. It is unsurprising that a number did not complete the four-year training, either being expelled or absconding instead.

Also in Wapping is St John's School, founded in 1695 and moved to this building in 1756. The statues are accompanied by additional information including the school name, foundation date, the fact it was supported by voluntary subscriptions, and even the pupil numbers: 50 girls and 60 boys. Most notable is the quality of the figures, which have fine detail and a natural appearance rather than the generic and imprecise features of most examples.

Quality aside, there are similarities between all these schoolchild figures. Some features ensured that their purpose was recognisable: hence the fondness for placing papers or books in their hands. The general style of uniform reflected clothing styles of the period. Less obvious is the fondness for blue uniforms, but there's a very practical explanation: it was the cheapest dye.

Interesting article and great to learn about their origins.

They are truly magnificent statues at the St John's School in Wapping.

Thank you - and congratulations on launching your site today! WhatsInWapping looks like it will be a great resource.

Yet another revealing post, Caroline. Despite the sad history, there's something immensely appealing about the building and especially the statues - in the case of the latter, I find myself wishing them well, albeit helplessly and retroactively.