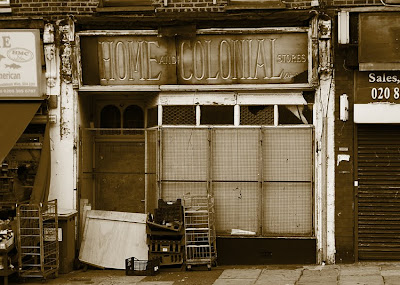 Work on a shopfront in Lewisham Way has revealed this sign for the Home and Colonial Stores. It must predate 1961, when the company changed its name to Allied Suppliers, although we could have guessed that from the style of the sign.

At The Library of Experience, Emily Henson describes shopping in this store:

There was one [smaller shop] 'Home and Colonial' where we'd get nice rashers of bacon. They served you from behind the counter wearing white overalls and a hat because of the food. They didn't wear gloves but would pick up the bacon with tongs to put it on the scales.

Home & Colonial were founded in 1885 by tea-buyer Julius Drew and Liverpool shopkeeper John Musker. Drew had been only 22 when he returned from the Far East, where he had bought teas for his uncle; the new shop business was so successful that he retired aged 33. Although tea was a key product for the stores, they also sold dairy products, sugar, bacon and ham. The first store was in Edgware Road, London but they expanded throughout the country, with 500 stores at the turn of the century. A merger with Liptons and others in 1924 brought together over 3,000 shops although they kept their different names. Chain stores competing on price long pre-dated the supermarkets!

Among the chain's chairmen was Lancelot Royle (1948-1964), who had been a talented sprinter in his youth. At the 1924 Paris Olympics, he won a silver medal in the relay; also in the team was Harold Abrahams of 'Chariots of Fire' fame. The company enjoyed great success under his control, but declined in the face of supermarket competition and eventually disappeared from the high streets.

However, only a few traces of the stores, such as this one, remain. A more lasting monument to Julius Drewe (he added the 'e' later in life) is Castle Drogo. A genealogist told Drewe that he was descended from the Norman Drogo family of Drewsteignton, Devon. He reacted as any fabulously wealthy eccentric might: by building a granite castle, Britain's last, near the village. It was designed by Lutyens and completed just a year before Drewe's death in 1931. Local people nicknamed it 'Margarine Castle' in tribute to the source of hs fortune. In 1974, fearing that a Labour government would introduce a wealth tax, his family gave the castle to the National Trust: the first twentieth-century building to be acquired by them.

Fascinating! I take it that the work has progressed now, and the sign is covered up again - or even gone?!

I'm away so I haven't been back to check, but I expect it will be covered up again. I'll report back when I get a chance!

My Grandfather used to be a grocer at the Home & Colonial Stores in New Malden and East Molesey in Surrey. It's great to see that old sign

Apparently it is still the same now. If I get a chance I'm going to write to the council and see if there's anything they can do to save it - as you say, it's one of the last little bits of history, and that little stretch could do with something to be proud of.

That's a nice idea - it would be lovely to see this continue to survive.