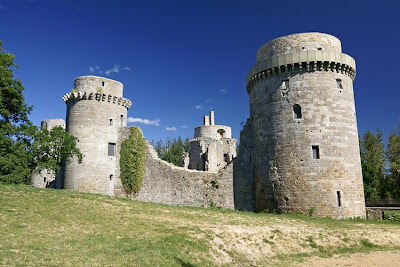 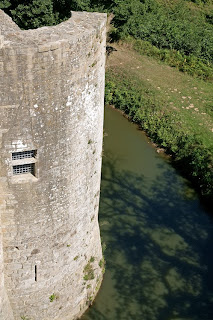 When I first visited France as a child, the phrasebook I carried with me was full of hidden dangers (although very useful for ordering ice creams). Following its advice to summon waiters by snapping my fingers and shouting garcon! would probably have resulted in some, ahem, interesting meals. Its claim that 'chateau' translated as 'castle' was less perilous but not much less misleading.

Most French chateaux are fancy country houses - often beautiful, but not a 'castle' in the English sense. However, the Chateau de la Hunaudaye is a proper fortified castle, complete with a moat full of water and plenty of towers. It has recently reopened after major conservation works, which have done a great job of making it safe to explore (as long as you like stairs and heights - there are five towers) without losing its atmosphere.

The castle was built in 1220 and remained in the ownership of the Tournemine family until the 17th century. They were eventful years for both building and people: the castle was destroyed and rebuilt in the fourteenth century; the family became powerful barons; their lands became more and more extensive. That's reflected in the castle, which offered a range of accommodation from luxurious seigneurial appartments to unpleasant cells. 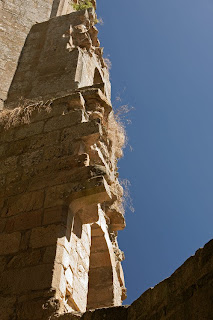 Why had the family chosen to build here, though? Today, it's a quiet location with no obvious strategic significance. However, in the middle ages it was on the boundary between the Dinan and Lamballe regions. Since Brittany was a rather fractious place, with various would-be rulers fighting for power and the French keeping a greedy eye on the area, the frontier between two regions was liable to take on military and political signficance.

By the seventeenth century Brittany was part of France and the castle was allowed to decline. When the area became one of conflict again, during the Revolution, the castle was damaged and burned. It then became a handy source of stone for local people.

The process of decay was finally stopped in 1930 when the state bought the castle. Today it is battered but proud, welcoming the visitors it once repulsed. 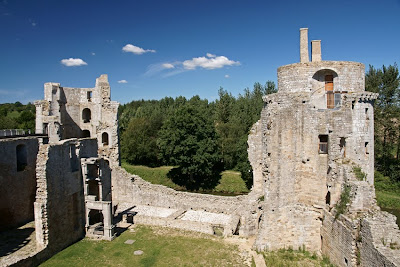 Email ThisBlogThis!Share to TwitterShare to FacebookShare to Pinterest
READ MORE ABOUT Brittany, castle