While Greenwich and Woolwich have pedestrian foot tunnels, nearby Rotherhithe is generally thought of as a tunnel for motorists. In fact, there is pedestrian access as well, with a pavement provided on each side of the roadway. In the interests of tunnel completeness, I decided to take a walk inside. 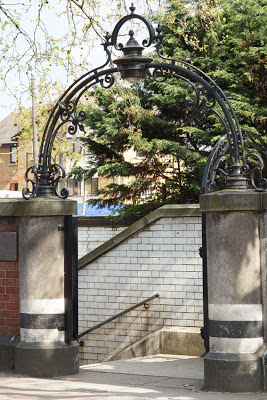 The visit begins well: pedestrians have a choice of walking down the gentle slope descending to the tunnel entrance or nipping through a welcoming gate and down some steps. At first, with the open air above and an adequately wide footpath, all seems good. 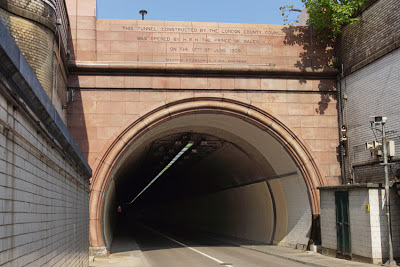 However, the interior of the tunnel is definitely not pedestrian-friendly. As the inscription above the entrance reminds us, it was opened in 1908 when most traffic was horse-drawn. Although the air may have been made piquant by horse manure and the occasional petrol engine, it must have been like nectar compared to the thick exhaust fumes filling the space today. Whatever the Edwardian creators of this tunnel may have intended, it's no place for the non-motorist now. 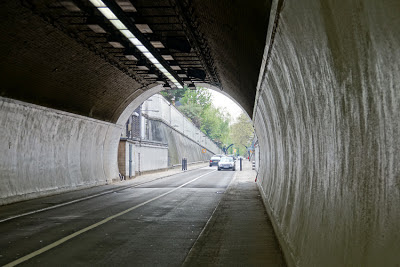 While pollution and congestion are the main criticisms levelled at the tunnel by modern users, the concerns at the time of its construction were rather different. That gentle entrance slope (vital for horse-drawn vehicles), the ventilation shafts and the new roads all take up substantial space, and the 3,000 local residents displaced by its building were vehement opponents of the scheme. Nonetheless, London County Council proceeded with the project.

The wonderfully-named Sir Maurice Fitzmaurice, the council's engineer, designed it; Edward H Tabor directed construction. Fitzmaurice had been engineer (with David Hay) for the Blackwall Tunnel, before going to Egypt to work on the Aswan Dam. After his return to London, he was the council's chief engineer and among his other major projects was the Woolwich foot tunnel. 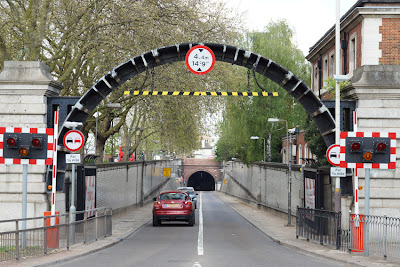 Part of the construction was by the cut-and-cover method but most required the use of tunnelling shields. Their cutting edges remain on-site, forming the entrance arches to the tunnel which is lined with cast-iron segments, covered in tiles. It is just under 1.5 kilometres long, and its maximum depth is 23 metres below the surface. 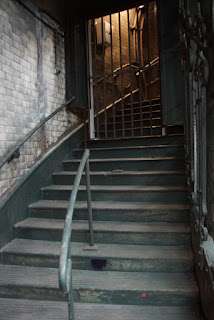 Given that length, ventilation is essential. There are four ventilation shafts: two marked by cupolas familiar to travellers along the Thames, and two rather more plain models set back from the river. The cupolas have staircases which once allowed pedestrian access to the tunnel, but they were closed due to damage in the Second World War and have never reopened. 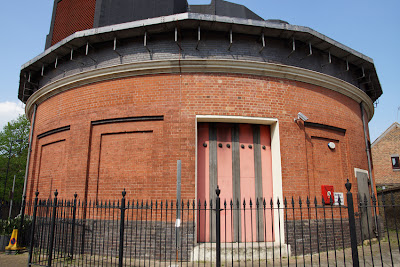 From the Rotherhithe end, the tunnel soon angles to the right and so it emerges further east across the Thames, in Limehouse. The tunnel's purpose was to serve the docks at its termini; a straight line between them would have had two problems - the docks themselves were in the way; and it was feared that if there was daylight visible ahead, horses might bolt. 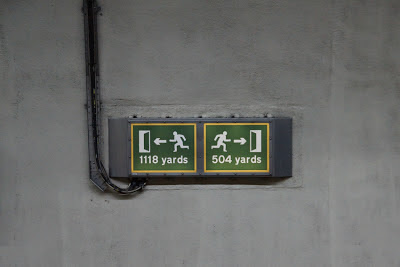 In 1908, the tunnel was opened by the Prince of Wales (the future George V). Welcoming 2,600 vehicles a day, it was considered a great success. Today, about 34,000 pass through each day, along with an estimated 20 (fool)hardy pedestrians. As for me, having washed the exhaust fumes away, I'm in no hurry to descend into the tunnel again. 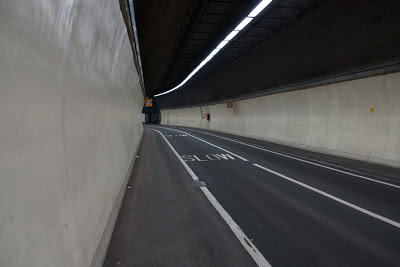 I have also walked in the more pleasant Woolwich foot tunnel and - just before London Overground moved in - the historic Thames Tunnel.

It sounds as though, on any future visits to the tunnel, breathing apparatus, or at least an oxygen mask, would be a desirable accessory!

There is something about tunnels that fascinates us. Perhaps it is a race memory of seeking refuge from weather and wild beasts in caves.

I always feel apprehensive when passing through a tunnel, being uncomfortably aware of the weight of land, and sometimes water, above me. A feeling of relief accompanies my emerging to see the sky once more.

I have no urgent desire to go through the Rotherhithe Tunnel on foot, so thanks for your account of it!

Did you see any cyclists? I've sometimes thought about cycling through but it sounds as though it might be better to walk the bike through on the footpath.

I'd definitely recommend breathing apparatus, SilverTiger! The air was pretty unpleasant - and the smell of exhaust fumes clung to my hair and clothes, as well. Luckily, they were easier to clean than my poor lungs.

Alan, I saw two cyclists, both using the other pavement. I think the first half of the tunnel, being downhill, is better cycled - but the consensus on cyclists' forums seems to be that the tunnel is best avoided.

Why did the cupolas and their staircases not get renovated and re-opened after the war? Other methods of crossing the distance would be faster and more comfortable, but not as historic.

I believe they've been repaired, but I can understand the authorities' reluctance to encourage pedestrians into the tunnel, which is not really very suitable for them. Better to use the equally historical Tower Bridge just to the west or Greenwich Foot Tunnel to the east.

A walk through Rotherhithe Tunnel would be an act of courage. We used to drive through frequently when I was a child, and sometimes even now, but it has never lost its nightmarish quality - Those endless white tiles, the water imagined above and, worst of all, the huge ventilation shafts that were impenetrably black and sinister. The fans made a noise too. And when a car broke down in there - you were stuck... [Shudder]

I've been through on a bike a fair few times. It's alright fumes etc wise, but the surface is very rough, not at all smooth, so I tend to avoid it and use the Greenwich foot tunnel instead even though you have to scoot on one pedal for the downhill and walk for the rest.

I cycle through it every day commuting to work (I live in Rotherhithe) and its not too bad as I'm probably used to the fumes and noise.

The options presented are cycling on pavement in direction of traffic. There are some dangerous narrow blind bends to cycle down and it's a narrow pavement too. Anything coming the other way is contrary to common sense. That includes pedestrians and cyclists.

The other option is cycling on the road but as it's single-lane traffic they cant overtake safely (hasn't stopped idiot drivers doing so) so as a consequence I've been beeped to hell by car users who seem to think they own the tunnel and perfectly okay to break the 20mph speed limit. I tend to cycle around 15-18 mph.

Anyway, it was built for horse and cart not cars. Cyclists and pedestrians should be fine to use it.

These are some great pictures!I've lived in Rotherhithe for around a year now and it's just such a wonderful place to be! Everyone seems rather friendly and there are plenty of great footpaths and tunnels to explore, I recommend that everyone should live here.

I cycle through Rotherhithe tunnel occasionally and agree with John Murtagh - the best option is to cycle on the pavement, although it's slightly rough and can be dangerous if anyone decides to walk/cycle against the flow (has happened once), and the long ride out is extremely sweat-inducing. I would definitely cycle, not walk, through - fumes are pretty bad.

Cycling through the tunnel instead of past Tower Bridge or walking through the Greenwich Foot Tunnel saves me about 20 mins from SE to Stratford area, so it's a decent option but I have to prepare myself mentally each time I decide to cycle through!

The Rotherhithe Tunnel, in the light of modern safety requirements, was assessed as the seventh most dangerous tunnel to users in Europe!

Thank you so much, Caroline for a wonderful blog.

Just about to go and meet Malcolm and Jen to do this walk.... stand by for updates. See yoy soon JPx

Thanks for this blog! Google Maps gave me walking directions which suggested going through Rotherhithe Tunnel but you have convinced me to save my lungs and take the slightly longer way round.

well i don't mind a good tunnel walk and decided to give it a go but 1/3 way in I turned around due to shortness of breath and then lightheadedness ... this was a midday ... i'm quite fit ,,, so I would say stay well clear of it ! will try the walk tunnel next, that should be way better !

Yes, the pedestrian tunnels are definitely much more pleasant. Today I read a Guardian review of Iain Sinclair's new book, in which he walks the Overground: he had the sense to take the train for this section only!

Anyone looking to walk / cycle through the tunnel should choose London Marathon day when it's closed to traffic... ��

That sounds preferable ... except for the 26 or so miles' run!

My friends and I walked through one night for the hell of it at about 2 in the morning back in the 80s. Not a car to be seen

Paul, that is definitely the best time to do it!