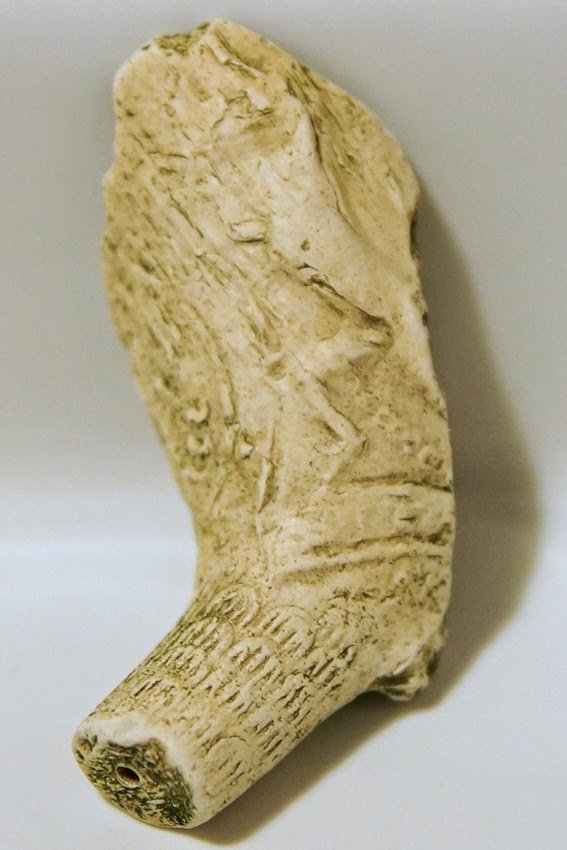 Email ThisBlogThis!Share to TwitterShare to FacebookShare to Pinterest
READ MORE ABOUT london, thames

It looks to me as if the man is still chained, with faint traces of links continuing up to where his hand would have been, and still kneeling, though the pose shown in the stamp below has been confused by bad copying. In liberation medallions such as this the man is shown standing straight and facing the front, not capering about as the bent leg here might seem to indicate.

Ralph, I've stared at that image so much, I'm not sure of anything any more! However, the leg which is fully visible appears to be upright, and there's a crescent-shape just above the knee which could be an open manacle. The raised arms are also suggestive. However, with the poor quality of the original and the subsequent damage, it's very difficult to tell. Thank you for the liberation image!

As you say, there is very little to go on. I'd been guessing something like this, but could very well be wrong.

If that's what it is, it is apparently a rare find according to this site: https://www.blogger.com/blog-this.g?u=http://lincsdays.blogspot.com/2014/05/watkinson-clay-pipe-factory-in-market.html?spref%3Dbl&n=Lincolnshire+Days:+Watkinson+Clay+Pipe+Factory+in+Market+Rasen&t=George+Spencer+Watkinson+was+the+builder+of+the+Market+Rasen+Clay+pipe+factory,+which+he+built+in+1843.%C2%A0+The+factory+made+clay+smoking+pipes...
Oops! Not sure I posted that link properly...

Thank you! Here's the corrected link.

Fascinating. I think we lost an interesting folk tradition when clay pipes went out of fashion.

The clay pipe featured in the BBC series A History of the World in 100 Objects is much closer to the original Wedgwood image, which is thought to have been designed by the wood engraver Thomas Bewick.

That looks altogether much better quality than mine, Ralph!

Thank you for the annotated picture - I've added in some bits which are faint but seem to be there (with much squinting at the original). The arms do appear to be raised.

To add to the mystery, over on Twitter The Clink Prison pointed out the similarity to the Hanoverian crest on photo number 8 here. To me, the figure looks more human - but it's hard to be sure with heraldic figures.