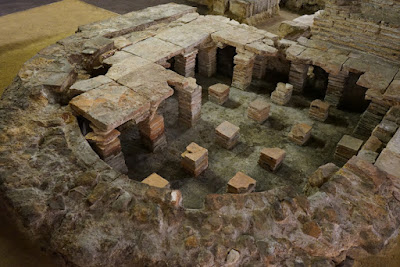 Not to be confused with the 'Roman' baths off Strand, Billingsgate Roman baths are very much the real thing, and come attached to a house. Discovered in 1848, they were soon covered by the Coal Exchange, and today are beneath an office block, but can now be accessed on regular Museum of London tours. 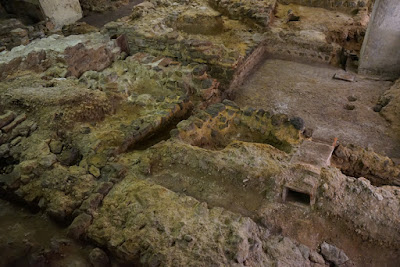 Entering the basement, one first sees the home. At first, it looks like a jumble of rubble, but a closer look and the guide's expertise make sense of the bricks and stones. The concrete pillars, however, are 1970s additions - and pose their own conservation challenges as they bring moisture and salts into the area. 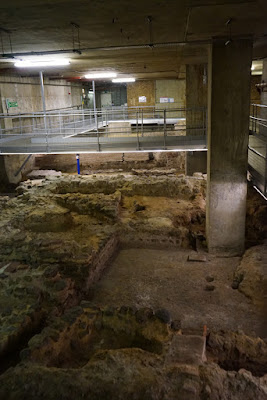 This complex was constructed relatively late in Londinium's history, replacing two separate buildings with one larger one. It may have been the villa of a wealthy family, or a mansio (a sort of inn): certainly, the owners could afford a costly hypocaust system to carry heated air from a furnace through tunnels under the floors.

Intriguingly, this expensive under-floor heating system was blocked up at some point. A later replacement is much shoddier, with uneven walls, and too small to clean: was this the work of cowboy builders, or a reflection of dying expertise?

If the central heating was a luxury, perhaps an even greater one was the private bath house. It offers the typical amenities for Roman bathing: two heated rooms (the warm tepidarium and the hot caldarium) as well as a frigidarium, or cold room. The latter would usually have a plunge pool, but for some reason this one - despite being disproportionately large - did not. Instead, there was a small cistern holding river water at the end. It would have been unpleasantly stagnant, as well as very small: not the nicest way to end a bath!

A model brings the baths to life. Note the poor man shivering in the cold water tank at the back. 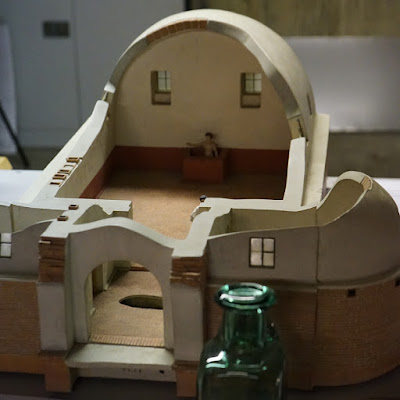 The Roman remains are an active archaeological site as well as a scheduled monument. They also make up one of the very finest - and yet little-known - Roman sites in the city. Take advantage of that, and go on a tour while they are still easy to book: a visit is highly recommended.

Email ThisBlogThis!Share to TwitterShare to FacebookShare to Pinterest
READ MORE ABOUT city of london, london, victorian

Oh! I love learning new stuff about my city. Romans were always an undecipherable bunch! Thanks for the post.

Thank you! There are certainly some undecipherable features of the villa/baths.