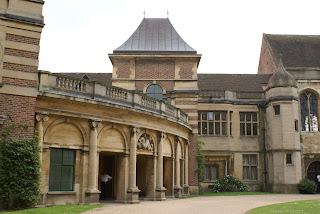 Stephen and Virginia Courtauld somewhat controversially transformed the former royal palace into their dream home in 1936. They kept what remained of the original palace – basically the great hall Henry VIII played in as a boy, with its fabulous hammerbeam roof - adding stained glassand a decidedly inauthentic minstrel’s gallery. 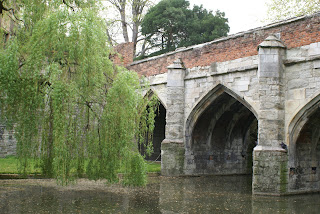 The attached new house, though, made few concessions to the site’s history: it combined Art Deco, ocean liner design, and the latest technology. Nonetheless, the overall effect is reasonably harmonious: neither building looks out of place next to the other.The entrance hall has a circular carpet mirroring the glassy dome in the ceiling, with marquetry panelling on the walls. There are ‘portholes’ in the stair walls, an effect mirrored in the built-in furnishings elsewhere. Ladies’ and men’s cloakrooms at the entrance are a reminder that the house was used a great deal for entertaining. 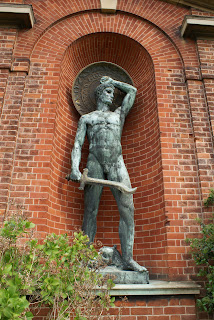 Perhaps the most memorable room is Mrs Courtauld’s bathroom, designed as a temple to Venus: behind the bath is an alcove lined with gold mosaic tiles, housing a Classical statuette. Along with such en suite bathrooms, other modern amenities include a central vacuum cleaning system and a speaker system playing music throughout the ground floor (revolutionary at the time). Even their pet lemur's dedicated room had central heating!

However, Mr Courtauld’s love of technology did not extend to the telephone. Guests were expected to use a pay phone just off the hall, not only because telephone calls were expensive but also because he personally disliked the instrument. This kind of personal feature emphasises just how much the house was one couple's vision of a perfect home, not just a fashionable showpiece.
- June 17, 2008