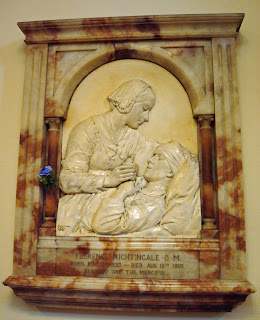 The traditional image of Florence Nightingale is 'the lady with the lamp', a gentle and feminine figure tending the wounded of the Crimean War. However, while her role in the military hospital of Scutari made her famous, it also gave a misleading picture of her as an embodiment of conventional Victorian feminine virtues.
In fact, Nightingale was a forceful and determined woman, a pioneer of nursing education and a committed feminist. She had to defy her family in order to become a nurse, and fought again to make nursing a respectable profession. Her aims were much wider than simply ministering to individuals: she sought to reform the way that nursing was practised.

The Nightingale Training School for Nurses at St Thomas' Hospital was established by her and she was involved in it for over 30 years. She also advised the government on nursing reforms and public health. Nightingale based her work on careful analysis of statistics: she was the first woman to be elected a fellow of the Statistical Society.

Unsurprisingly given her own achievements, Nightingale was critical of the passive and domestic role middle- and upper-class women were expected to fill. In Cassandra, she spoke out against the neglect of women's minds:

If we [women] have no food for the body, how we do cry out, how all the world hears of it, how all the newspapers talk of it, with a paragraph headed in great capital letters, DEATH FROM STARVATION! But suppose one were to put a paragraph in the “Times”, Death of Thought from Starvation or Death of Moral Activity from Starvation, how people would stare, how they would laugh and wonder! One would think we had no heads or hearts, by the indifference of the public towards them. Our bodies are the only things of any consequence.

Nightingale was, then, a much more complex figure than her public image suggests. All these aspects of her life are fully explored in the Florence Nightingale Museum at St Thomas' Hospital, London.
- June 29, 2008