He placed the river in chains 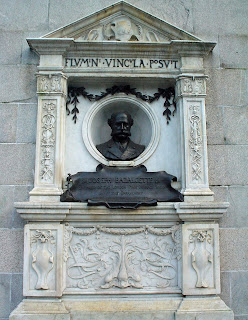 Tucked away near Embankment is this monument to Joseph Bazalgette. In recent years his name has once again started to become familiar to Londoners (thanks in large part to Stephen Halliday and his book The Great Stink of London).
150 years ago, the River Thames was a major trading route, a source of drinking water ... and an open sewer. As the city grew, the old system of 'night-soil men' emptying privies and selling on the solids as fertiliser was no longer keeping up with the volume of waste. Meanwhile, the popularity of the flush toilet further increased the volume, cess-pits overflowed, and the noxious stuff made its way into sewers designed only for rainwater. The result: sooner or later, most of this sewage flowed into the Thames, without any treatment before it got there. Add in a hot summer, and the stench became absolutely unbearable.

Typhoid and cholera hadn't prompted the authorities into effective action, but when the smell overwhelmed the House of Commons, something was finally done. Bazalgette was put in charge of solving the problem, and created the sewage system we still use today. Instead of flowing into the Thames, waste is caught by two intercepting sewers so that it can be treated and taken clear of the city. The scale of the project is unbelievable, with over 500 miles of main and intercepting sewers.

However, Bazalgette not only cleaned up the city; he also changed its shape. The land of the Victoria and Albert Embankments was reclaimed from the Thames to hold the intercepting sewers and narrow the river. A narrower riverbed meant a faster flow of water, so that stinking mud did not collect. The embankments also hold pipes, Underground tunnels on the north bank, and main roads.

Bazalgette may have made London bearable once more, saved uncountable lives, and even reshaped the Thames, but that's not the limit of his achievements! He designed Battersea Bridge, Putney Bridge and Hammersmith Bridge, set up the Woolwich Free Ferry, and laid out major London streets including Charing Cross Road, Shaftesbury Avenue and Northumberland Avenue. Given all this, his memorial's motto 'flumini vincula posuit' (roughly, 'he placed the river in chains') seems not a boast but an understatement.
- June 28, 2008