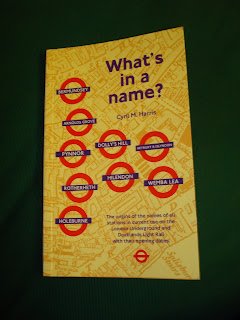 One of my favourite London books is a small volume called 'What's in a name?' by Cyril M Harris. Its simple but inspired concept is to give the origins of every underground and Docklands Light Railway station name. Obviously, I couldn't resist turning to my local stations first, but this is also a great book to dip in and out of. The mix of etymology, local history and station opening dates means you'll always learn new and random London facts - I found that a Civil War skirmish took place near New Cross in 1648, and that later a coaching tavern called the Golden Cross stood there; while Islington used to be Gislandune.

See if you can answer the following questions: answers will appear here in the next day or two, or you can find them in the book!
- June 25, 2008