Peter the Great in Deptford (2) 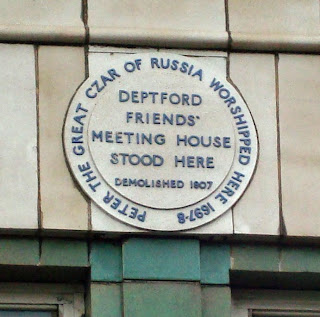 When Peter the Great visited Deptford in 1698, he may have divided most of his time between learning shipbuilding and drunkenly wrecking his temporary home at Sayes Court. However, in quieter moments he also worshipped at the Friends' Meeting House in Deptford High Street. There, he discussed religion with William Penn.
Penn was no ordinary Quaker, but the founder of Pennsylvania. He had converted thirty years earlier in Ireland and went on to face persecution for his faith. In 1670, he and William Mead were arrested for 'tumultuous assembly'. Famously, the jury acquitted them; the judge, disagreeing with their verdict, then imprisoned the jury! The King's Bench held that no jury can be punished for their verdict, thus establishing one of the fundamental principles of our legal system. 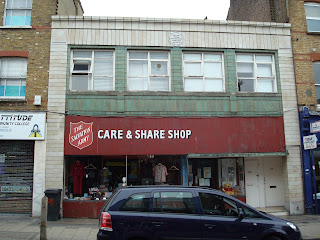 Persecution of Quakers continued, and many died in prison; Penn himself was imprisoned several more times. Eventually, he asked King Charles II for land in America as payment for a loan made to the king by his late father. He was given Pennsylvania, which was named not for William but for his father. Penn became governor of the colony in 1682, although he spent most of the rest of his life in England.

The Friends' Meeting House has not survived, and is now a Salvation Army charity shop. The czar's visit is commemmorated by a plaque high on its wall.