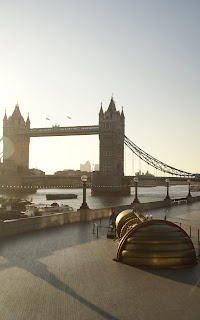 Okay, something tells me this might not really be done by a long, long tunnel and some mirrors. Nonetheless, you truly can see New Yorkers at the other end (by Brooklyn Bridge) in real time - there were some very excited people waving at friends when I was there - and it's a fun idea. See it in lots more detail on the website.
- June 14, 2008