This sign is on the north wall of Spitalfields market. It left me wondering whether R Horner was incredibly modest, emphasising he only "finished rebuilding", or incredibly vain for commemorating himself at all. 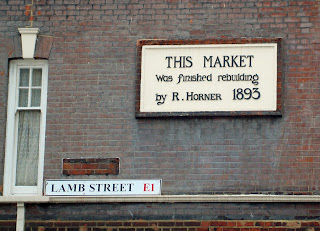 The market's history suggests a third answer: he was relieved. Robert Horner rose from being a market porter to buying the market in 1875. Rebuilding Spitalfields market was a major and contentious project, which cost £80,000 (roughly equivalent to about £8 million today). The plaque marks its end, after 18 years, in 1893. Horner eventually sold the market leasehold to the City of London in 1920.

So Robert Horner didn't just "finish" the rebuilding; instead the sign appears to commemorate the end of a long and fraught project!
- June 14, 2008

hi this is my great great grandad or something :)