From face masks to facades 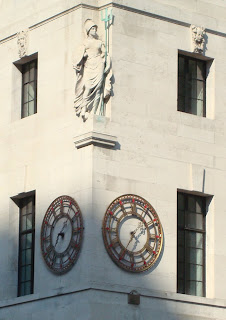 This statue of Britannia stands, appropriately enough, on Britannic House, Finsbury Circus. The building was designed by Sir Edward Lutyens and built in 1925 for the Anglo-Persian Oil Company, which we now know as BP. The British government had become a major shareholder in 1914, persuaded by Winston Churchill that Britain should have its own oil supply.
Britannia was sculpted from Portland stone by Francis Derwent Wood, RA. He specialised in architectural sculpture, and had also produced the Machine Gun Corps Memorial at Hyde Park Corner. In a previous colloboration with Lutyens, he had carved the wreath on the Cenotaph.

However perhaps the most extraordinary aspect of his career was his work producing metal masks for men who had suffered serious facial injuries in the First World War. When plastic surgery by the pioneering Harold Gillies was unable to help, such a mask could hide injuries and recreate missing features; it usually covered only part of the face. Officially the Masks for Facial Disfigurement Department, Wood's department in the 3rd London General Hospital became known as the 'Tin Noses Shop'. Wood's work also inspired another sculptor, Anna Coleman Scott, who opened a Studio for Portrait Masks in Paris.

Mask-making was a laborious process: the person's face was cast in plaster of paris; a 'squeeze' was made of plasticine or clay; and missing features would be matched to the undamaged side of the face and pre-war photographs. The mask was then made of galvanised copper and carefully painted by an artist to match the patient's skin tones. The Project Facade website has silent film of the making and fitting of these face masks.

The masks of course had no movement or expression; they cannot have been convincing. One wearer's children were frightened by his motionless face. Nonetheless, they changed lives: Ladd wrote that "the letters of gratitude from the soldiers and their families hurt, they are so grateful." Almost nothing is known of what happened to the wearers after the war.
- June 15, 2008