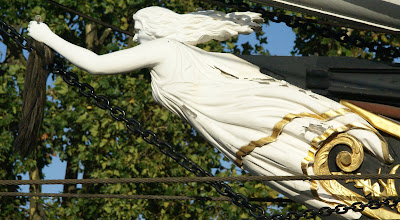 The ship is currently undergoing restoration, which has been complicated by a fire in May 2007. Happily, the figurehead was in storage at the time of the fire and survives unharmed. The ship's restoration is expected to be completed in 2010; meanwhile, the fundraising continues. You can donate here.