It's a common complaint that we're overwhelmed with advertising, and we tend to assume that it's getting worse. However, a hundred years ago advertising was at least as hard to avoid as it is today.


First, the streets were full of huge, colourful adverts painted onto the sides (and even fronts) of buildings. I've already posted on ghost ads, and you can see a much bigger selection of them here. When new, they would of course have been bright and eye-catching - and seem to have been on walls all over the place; more ephemeral posters and even magic lantern displays were also used. 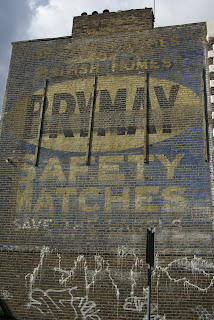 Then there were mobile adverts. The pavements were filled with sandwich men, while on the roads buses served as travelling billboards to an even greater extent than today. This bus from 1911, now in the London Transport Museum, is not only crusted with advertisements but even has them liberally coating the windows. 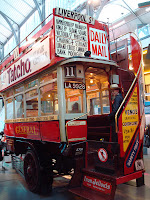 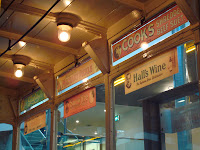 Try to ignore all that colourful publicity by reading a book, and there were black-and-white versions on the front and back pages. This selection comes from Mrs Beeton's Every Day Cookery and Enquire Within Upon Everything: 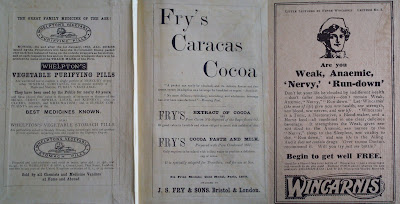 And what better to use as a bookmark than an advertising trade card or flyer? Sneaky advertisers even disguised them as banknotes! Give in to the endless entreaties, step into a shop to buy one of these products, and you would have been assailed once more with enamel signs on the wall outside, displays on the wall and counter inside, and even the mirror doubling as an advert.

Enjoy a book or play? Great - now you could buy the accompanying perfume, sheet music, food, toothpaste, clothes, and in the case of the novel Trilby, hats. Its author might give celebrity endorsements: while novelist Sarah Grand promoted Sanatogen, Oscar Wilde was associated with a breast-enlarging cream, Madame Fontaine's Bosom Beautifier.

Junk mail was a problem too, but you might think that our ancestors were at least safe from spam. However, Matthew Sweet demonstrates that the Victorian equivalent made its appearance as early as 1864, when Harley Street dentists Messrs Gabriel sent out a large number of unsolicited telegrams. Expecting the messages to be important, recipients were so disgruntled to find that they were nothing but advertisements that some even wrote outraged letters to the Times.

So, as we hold our advert-free books, hit the delete button or mute the television, we're perhaps less oppressed by advertising than our ancestors after all.

And not to forget the OXO tower on the south bank - very crafty!