Today we're at Tower Bridge. Imagine: a London bus has just driven onto the bridge - so far, so routine. However, something strange happens: the road ahead seems to be dropping away. Then the driver realises that in fact, the bit of road he's on is rising. The bridge is opening, with his bus on it. It's probably too late to stop before going over the edge; if he carries on, he'll have to jump the gap. What should he do?
This really happened to one bus driver, Albert Gunter, on the evening of 28 December 1952. He was driving the number 78 to Dulwich, a busy double decker, when something went wrong and he found himself on a rapidly opening bridge. Amazingly, the driver had the nerve to accelerate and jump the gap between the two bascules. The bus made the leap - about 3 feet by that point - successfully, and nobody was seriously injured. Albert Gunter received a reward of £10 for his bravery.

Sadly, there is no photo of the event but here's a (non-) artist's impression! 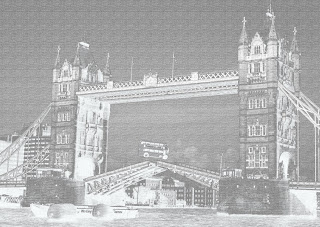 What's funny about finding this blog entry is that Albert was my dad. My moms relationship with him wasn't faring well so she left. Mom told me one day that my real father was the only man to have jumped tower bridge in a London Transport double decker.
I never met the man as my mother married my adopted father and on it went. Thanks for posting this:)

Glad you liked it - it's an amazing story!

Wasn't his surname Gunter not Gunton?

Both versions appear, confusingly, but as far as I know Gunton is correct.

We must be related somewhere Micheal. Albert Gunter is my grandads uncle. My grandad often told me the story about how he jumped his bus over the bridge.

Sarah, I'll trust you on the spelling and amend!

i worked with albert at dalston bus garage,is name was albert gunter,,i dropped him of home a few times in theberton st,sadly he is dead now...

Albert Gunter was my uncle and I well remember as a fifteen year old the excitement this event caused in the family. £10 does not seem a lot for saving a bus and all the passengers as even in those days it was little more than a weeks average wage.b

Hi my father-in-law is Albert gunters son, and he does not have any brothers, only sisters, so a little confused...:(

I always called him uncle although strictly speaking he was an uncle in law as his wife Emmy was my Aunt (maiden name Atkins)
Hope this makes it clearer.

It was actually on Tuesday 31st December 1952 at just after 9:30pm
according to reports in both the Daily Mail and The Evening Standard
on the 31st December

Anon, it was reported on 31 December so must have happened before that. The LT Museum website used to give the date as 28 December, although that page no longer exists. Some sources give 30 December - it's no wonder that many accounts have settled on 'in December'!

His name was Gunter, He was my great uncle, my late mother told me the story when I was a child.

His name was Albert Gunter he was my great uncle. I never heard that he was married previously or that he had a previous son? That would make my aunt Edna and her brother this man Michael Wollen's half brother and sister? Thus family story always fascinated me as a kid and I would brag about it.
I read in these reports that he broke his leg I always heard from the family story that it was his arm that he broke and that when he got home to Islington and told his wife "Never guess what happened to me to day" and she just said "that's just typical of you" and carried on ironing lol.
I heard he also appeared on the BBC programme 'Whats My line' in 1953 hosted by Eamon Andrews.

Back in early seventies, I remember a kids publication called 'World Of Wonder'. One of the magazine's early front covers featured an artist's reconstruction of the incident. From what I recall of that picture the gap was slightly exaggerated, maybe for dramatic effect. What I also recall is my mother telling me she was a witness to this incident, although I admit I cannot authenticate this.

Albert's heroics were covered on QI - Series I, episode 'Indecision'.

If it was New Year's Eve perhaps he'd had a few and thought it seemed like a good idea at the time.

Wow all these comments. So my grandmother told me this story and albert was her great uncle, making him my 3rd great uncle.
His neice was my great grandmother louise field, (maton. Married name).. please anyone who is related please get in touch