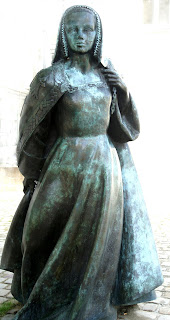 Historically, Brittany was a duchy independent of the rest of France. Its last Duchess, Anne, devoted her life to safeguarding its independence - as a woman in a time of dynastic marriage, her only method of doing so was through marrying herself and her children strategically. Although she ultimately failed, she did twice become Queen of France along the way!

Born in 1477 at Nantes, Anne was only eleven when she became Duchess of Brittany in 1489 on her father’s death. She was soon betrothed to Maximilian of Austria, but France felt threatened by this alliance of territories to its east and west, and invaded Brittany. Facing military defeat, she instead married Charles VIII, King of France, in an attempt to safeguard Breton independence. Nine years later, her husband died after banging his head on a doorframe and Anne resumed her position as Duchess of Brittany.
In 1499, Anne married the new King, Louis XII. It was agreed that she would retain the Duchy of Brittany, and that on her death it would pass to her second son, thus maintaining its independence (in fact, she would never have a second son, only one son and one daughter). The Treaty of Blois was signed in 1504 and stipulated that her daughter Claude would marry Charles of Luxembourg, which she hoped would safeguard Brittany’s independence. However, following a serious illness, Louis made a new will which ordered a marriage between Louise and the future François I of France, thereby threatening Brittany once more. Anne’s last hope now was to marry off her son and give him Brittany as a dowry, but her final illness prevented this.

She died in 1514 and was buried in Paris, but her heart was returned to Nantes in a golden receptacle. Her daughter’s marriage to the next King of France subsequently went ahead, and François I reunited Brittany and France on 4 August 1532.
- July 30, 2008

Hey, this is cool! This week I tripped across a good French patisserie in Cheltenham, a far-flung southern suburb of Melbourne, Australia. I was wondering why a French bakery would name itself after a duchess -- isn't than a British noble title? So I Oogled Duchess Anne and your blog post came up. Now I know more about a slice of French history than I did before. Serendipitous learning is a wonderful thing. Duchess Anne's history is not as fascinatingly tragic as that of Lady Grange (who also had an eatery down here named after her), but it shows that some Aussies put a bit of thought into the women who inspire their restaurants.