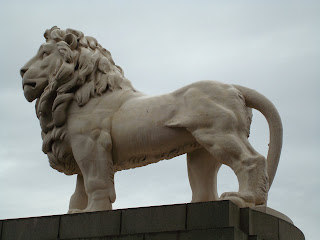 This magnificent lion used to guard the entrance to the Red Lion Brewery; now that the brewery is gone, it watches over County Hall instead. Don't be fooled by appearances, though - it's not made of stone.
The lion is a wonderful example of 'Coade stone', an artificial stone invented by Eleanor Coade in the eighteenth century. She came from Lyme Regis, and improved on earlier artificial stones by including clay from the west country as well as 'grog' (ground, pre-fired material which prevented shrinking). Also critical was skillful firing of the material over several days. The resulting ceramic, which Coade marketed as 'lithodipyra', was especially suitable for sculptures and ornate features: other London examples include the fountain in front of Ham House and the Nelson Pediment of the Royal Naval College, Greenwich. (It was also used around the country and even travelled as far as Rio de Janeiro). All demonstrate how resistant the material is to weathering, frost, and pollution - in fact, it outlasts real stone!

The lion was made after Eleanor's death, in 1837; three years later, the Artificial Stone Manufactory closed down and the secret formula was lost. However, in the 1970s the British Museum worked out its composition and a new piece of 'Coade stone' was made in 1987.

The Red Lion Brewery stood for over 100 years on the South Bank - although it took its water from wells, not the Thames. The main building was rather grand, 5 stories high with doric columns and a roof which acted as a shallow water tank, but in 1931 it was seriously damaged by fire. The building then stood empty until it was demolished to make way for the Royal Festival Hall. Its lion was moved to its current location, just down the riverbank at Westminster Bridge.
- July 04, 2008