From artichokes to caravans 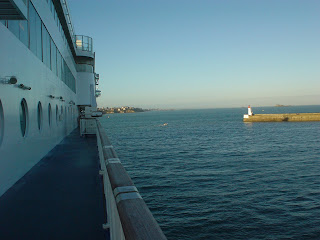 I'm off to Brittany shortly, so for the next few weeks there'll be more emphasis on all things Breton - although London stuff will continue to appear too! Since I'm about to cross the Channel, it seems a good time to post about Brittany Ferries.
While we think of the ferries as existing to transport holidaymakers between Britain and Brittany, their original passengers were cauliflowers and artichokes. Breton vegetables had been making their way to England from Roscoff ever since 'onion johnnies' created the British stereotype of the bicycle-riding Frenchman with a string of onions around his neck. However, there were huge and important changes in Brittany's agriculture in the 1960s. The region was then amongst the poorest in France, a situation made worse by low prices which middlemen negotiated with each farmer individually. Frustrated, younger farmers led by Alex Gourvennec came together and took control into their own hands by forming co-operatives to negotiate more effectively. They also convinced the French government to build a deep-sea port at Roscoff, but ferry companies seemed reluctant to use it. Gourvennec suggested a bold solution: together with the North Finistère Chamber of Commerce, the co-ops formed Brittany Ferries in 1972 to get their produce to a major market. They quickly realised that there was also demand from British tourists wanting to visit the region, and added a passenger service.

Brittany Ferries continues to commission new ships and is one of the major cross-channel ferry companies, as well as providing a service to Santander in Spain. Unsurpringly for a French business, they also have the best on-board restaurants!
- July 19, 2008