After a late start, the Greenwich Wheel has now been up and running for a few days; I made it there on Saturday. It's 60 metres high and sited on the banks of the Thames in the grounds of the Old Royal Naval College. As a result, the views of that Wren building are particularly good: 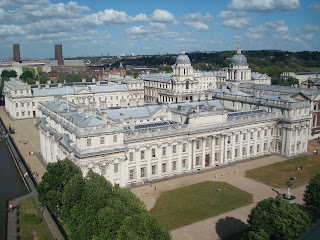 You can also see West along the Thames, with views of the BT Tower and the larger London Eye: 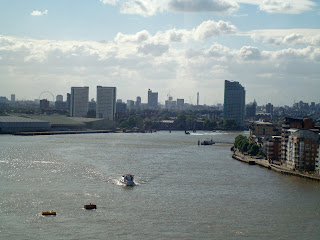 It's not the first observation wheel connected to Greenwich. In 1895, a Great Wheel was built to accompany the Earl's Court Exhibition. 90m high, it held up to 1,600 passengers and remained in operation until 1907. Its axle and bearings were made in North Greenwich by Maudslay, Son & Field, an engineering firm which also built steamship engines and created the famous orange ball on the Royal Observatory which descends at 1pm each day. 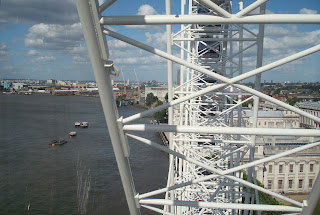 Some practical info: This is a temporary visitor to Greenwich, leaving again on 28 September; in the meantime, it's open 10am-10pm daily. Less than half the height of the London Eye, it also travels faster - meaning we got 4 circuits, in a pod which holds about 6 people (although two of us got it to ourselves). It's also a little bit wobblier, which is slightly unnerving when you can hear the wind whistling at the top of the circuit...
- July 07, 2008