Hawksmoor in Spitalfields: establishment or esoteric? 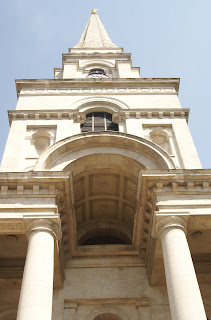 In 1711, Parliament passed an Act providing for the building of fifty new churches to serve London's growing population. They would be paid for by a tax on coal brought into the Port of London. In fact, only 12 churches got built - money proved to be a problem - and among the finest of these is Christ Church Spitalfields, completed in 1729. (The restoration which finished in 2004 took longer than the original construction).

Queen Anne was particularly concerned about the growth of non-conformism, and the new churches were to have spires so that they would tower above non-conformist chapels. Given Spitalfields' population of French Huguenot silk weavers, it was a prime target for such a church; Christ Church certainly fulfils its brief of dominating its surroundings. Ironically, among those to preach here was John Wesley, founder of Methodism.

The architect was Nicholas Hawksmoor, a former pupil of Sir Christopher Wren. He had already been involved in rebuilding Kensington Palace, had designed parts of Castle Howard with Sir John Vanbrugh and the King William Block at Greenwich Hospital, and worked for Oxford and Cambridge Universities. Despite his distinguished career, an aura of mystery and darkness seems to surround him. Hawksmoor was a freemason and fond of using pagan symbols; he was fascinated by all religious architecture, not just that of Christian churches. Such strangeness inspired Iain Sinclair's Lud Heat which famously suggests that the Hawksmoor churches were built to enshrine some code or mystic plan:

We can mark out the total plan of churches on the map and sift the meanings. ... From what is known of Hawksmoor it is possible to imagine that he did work a code into the buildings, knowingly or unknowingly, templates of meaning, bands of continuing ritual. The building should be a Temple, an active place, a high metaphor. ... His motives remain opaque; his churches are the mediums, filled with the dust of wooden voices.

Sinclair in turn inspired Peter Ackroyd's novel, in which the architect is a visionary and a satanist. Contemporary opinion downplays such theories, but there is certainly something strange and arresting about Christ Church which sets it far apart from other city churches.
- July 02, 2008