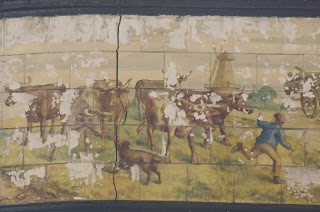 Look above the Saigon Bar and Restaurant on Old Kent Road and you'll see a shabby but intriguing mural. Full of rural scenes and herds of cattle, it might suggest that the premises used to be a dairy - but continue round to the left and you'll see a pub name, 'The Kentish Drovers'. It's a reference to the people who herded cattle up this road on their way from Kent to Smithfield Market. 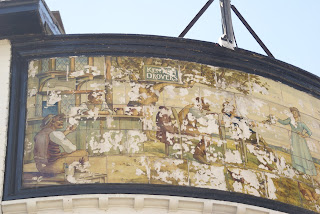 The pub seems to have lasted from the early nineteenth century to the 1980s. The National Archives hold an insurance record from 1838, and it was listed in the 1952 Black Eagle Journal. Unsurprisingly, its now-sorry state has got it onto English Heritage's At Risk register; nonetheless, the (rather battered) mural is still worth a look. 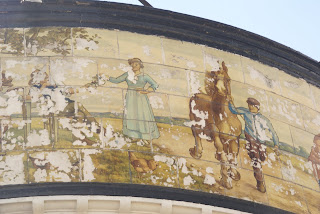 In 1912, the pub featured in an Old Bailey trial. Labourers Henry Hyde and William Dempsey were convicted of 'uttering counterfeit coin twice on the same day'. They tried to pay for two shandy ales with a fake half-crown, but were told by the barman that the coin was no good; they then tried the same trick at the newsagent next door, where they bought 'a pennyworth of Nosegay tobacco and 1/2 d. book of cigarette papers'. Both men were sentenced to twelve months' hard labour.

The court record says the men were in the pub's 'four-ale bar'. This was a bar which sold the cheapest beer, the 'public bar' (where beer originally cost 4p a quart)* as opposed to the posher 'saloon'. It's a reminder of the days when many pubs had several bars, each catering to a different kind of clientele. 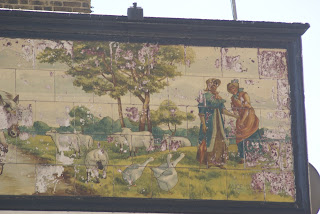 Caroline, Thanks so much for alerting us (as in the Tiles&Architectural Ceramics Society www.tilesoc.org.uk) to this via your blog. Quite how we missed it I don't know as we have recorded some 6000 entries in the UK, but, as from July 2011 we shall have this database of locations online on our website. This one will be there and I just hope that a combination of your blog, EH's list and our support will save what is undoubtedly a fantastic mural of real importance to the local area.
Penny

Thank you, I'm glad the post was helpful! I look forward to browsing your database in July.