Mapping London's history - and its lighting 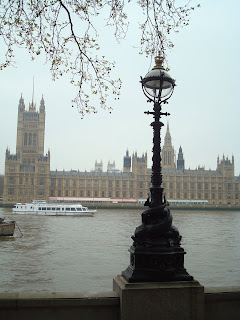 The Greenwich Phantom has highlighted this brilliant online resource: Greenwood's map of London from 1827 which, unusually for the time, was actually based on a survey and bore some relation to reality! Sadly it stops just north of my bit of Deptford, but I could still browse it for hours...
Drop in on any section at random and you're sure to find something unexpected or interesting. For example, just west of Blackfriars Bridge is the label 'City gas works', which seemed surprising for 1827. However, a quick search online reveals that London pioneered the use of gas street-lighting in Pall Mall, in 1807. The London & Westminster Gas Light & Coke Company got its charter from Parliament in 1812, and the following year Westminster Bridge was lit by gas. The City Gas Works company followed, carbonising three chaldrons of coal a day at their Blackfriars works (enough for 9,000 lamps). Its buildings were described in Black's Guide to London of 1863 as 'unsightly', built on the former Alsatia district which was 'the haunt of the worst class of people'.

Between 1822 and the year of this map, 1827, London's consumption of gas had nearly doubled and gas lighting had spread through Britain's towns. By the time of Greenwood's map, then, gas works were pretty old hat.