Observation wheels have enjoyed huge popularity since the success of the London Eye. As well as the Greenwich Wheel, I've recently been on the Wheel of Belfast and the Roue de Paris: 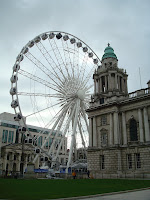 However, the history of such wheels goes back much further than the millennium. The observation wheel was invented by George Washington Gale Ferris Jr - hence its other name, the Ferris Wheel. He created the first one for the World's Columbian Exposition in Chicago in 1893. Although it was a huge success, it nearly didn't get built: the exhibition committee originally rejected Ferris as a crackpot. Only when he came back with the support of other engineers and investors did the committee agree to the scheme. The wheel went on to carry about a million and a half people and make a considerable profit. Sadly, Ferris died in 1897, locked in legal battle with the fair organisers over his share of the profits.

Europe soon followed suit, with wheels constructed by engineer W B Bassett. London was first to get one, at Earl's Court in 1895. In 1896 it suffered a breakdown which left passengers stranded overnight; the Grenadier Guards band played and seamen climbed up to bring food and drink to the passengers, who were each given £5 compensation on their return to earth. However, the incident didn't dent the popularity of such giant wheels: Blackpool got one the same year, while Paris built one for the 1900 Exposition Universelle (rather overshadowed by the Eiffel Tower). Vienna's wheel, the Riesenrad, was built in 1897 and is still working today.

The London Eye inspired a similar flurry of imitators. The current world's tallest is the Singapore Flyer, 165m high. However, by next year it's likely to have been overtaken by three others in Dubai, Berlin and Beijing. It looks like the observation wheel will be with us for some time yet!