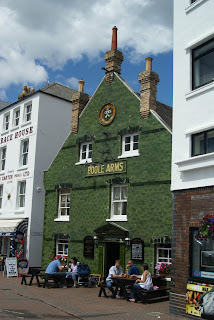 As a maritime town, it's unsurprising that Poole has a lot of pubs. When I stopped overnight in the town on my way to Brittany, I did the Cockle Trail walk and saw many of them - even if I didn't drink in many (honest!) - and most have a story attached.

Probably the most distinctive building on the Quayside, the Poole Arms is also the oldest. It's covered in green tiles, made locally by Carter's of Poole which has since become the famous Poole Pottery. High on its front is the town coat of arms which features scallop shells, marking Poole's importance as a departure point for pilgrims to Santiago de Compostella. They would sail to the Bay of Biscay, and return with scallop shells as souvenirs. The spiky fish is actually a dolphin. 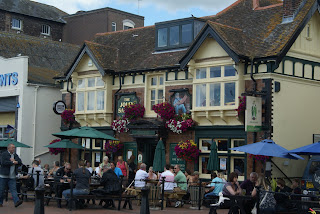 A little further along the sea front is the Jolly Sailor. When Harry Davies was landlord here, he became famous for the number of times he jumped into the quay to rescue people. Perhaps some were over-enthusiastic customers?

Moving inland to the High Street, the Antelope is noticeable for its distinctive sign. Again, the inn has a very long history: it has been around for over 500 years. In the nineteenth century it was a coaching inn; you could depart from here to Bristol, Bath, Southampton or London.

These are just a small sample of Poole's pubs. You could also visit the King's Head which has smugglers' passageways, the Angel Inn where Poole's Reform Club met in the early nineteenth century, the reputedly haunted Crown Inn and King Charles pub, or the Lord Nelson where Augustus John used to drink, or many more...
- July 23, 2008