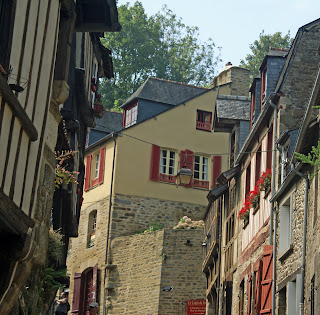 One of the most beautiful towns in Brittany, Dinan rises over the river Rance. Since the city walls are high above the port which was the source of much of its wealth, a way of travelling between the two was essential. Today there are several roads, but in the past the main route was the steep, narrow rue de Jerzual. Many of Dinan’s hundred half-timbered buildings are concentrated here, between the river and the city gate.
This little street is the scene of a challenge on the third Saturday in September: the winner is the person who makes the fastest ascent. However, in the past it was more notorious as the dirtiest road in the town. Its steepness meant that all the filth from the settlement at the top flowed down when it rained. Today, happily, the rue de Jerzual is much more picturesque. It has been pedestrianised while wider, more gently-sloping roads take the traffic. You can break the steep ascent up its cobbles with visits to the little shops and art galleries which line it.
- July 29, 2008