Yesterday morning, I saw an airship flying past my kitchen window. Given the branding, I assumed that it was an advertising stunt - but according to the evening's London Paper it was actually carrying passengers. I've always fancied an airship ride, but perhaps not at £185 for half an hour! 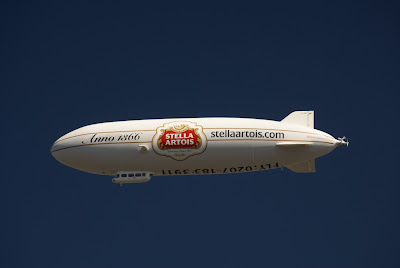 Seeing them reduced to a (rather costly) novelty experience, it's hard to imagine that airships were once seen as the future of mass air travel. They have been around for far longer than aeroplanes: the first airship had a steam motor and flew 17 miles in 1852. The first Zeppelin was launched in 1900, and after use of dirigibles in World War I for bombing and reconnaissance, they enjoyed their golden period in the period between the wars as passenger craft. The Graf Zeppelin flew over one million miles, safely.

However, flying suspended under a vast bag of inflatable gas posed obvious dangers. The British rushed their own airship into flight in 1930, so that it could carry the Air Minister to India; it crashed in France, killing all but 6 of those on board. In 1933, the US Navy's USS Akron flew into the sea and almost all on board either drowned or died of hypothermia. One incident, though, would finish the era of passenger airships instantly. Famously, in 1937 the Hindenburg burst into flames over New Jersey, killing a third of those on board. The event was captured on film and photographs, seen all over the world.

Tragic as its ending was, the Hindenburg's early life had been rather unsavoury: it was initially used for Nazi propaganda, on Goebbels's orders. However, it quickly moved into commercial flights between Germany and the Americas. The passenger accommodation was luxurious, with dining room, writing room, lounges and cabins. There was even a smoking room, pressurised and with air-lock doors for safety! What a contrast with modern economy class flights...
- July 15, 2008

That makes the observation wheel seem like a proper bargain!

Funnily, that was my first thought too!