All sorts of pancakes! 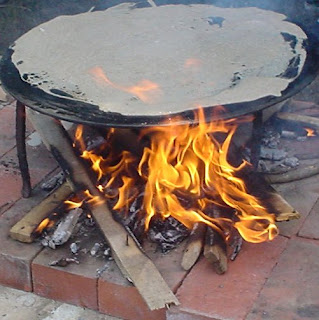 Brittany’s most famous specialities are its various forms of pancake. Most of us are probably familiar with the sweet crêpe, a light pancake delicious with sugar and lemon or Nutella. It’s also the basis of French classics such as crêpe Suzette. However, this is only one variety of Breton pancake.

Bretons also eat galettes with savoury fillings; their brown colour comes from the use of buckwheat flour. Buckwheat grows on poorer high ground and was introduced to Brittany in the fifteenth century, apparently by Saracens – hence its French name, sarrasin. It makes a darker, slightly heavier pancake than the wheat-flour crêpe. Popular toppings are ham, cheese and egg (a galette with all three is known as a complet), but there are plenty of more imaginative alternatives: sardines, mushrooms, onion, even andouille sausage. For food on the go, the galette saucisse is always popular. A sort of Breton hot dog, it’s a galette wrapped around a barbequed sausage.

Crêpes and galettes are made on a flat billig, and a swirl of the wooden rozell spreads the batter thinly and evenly. In Breton, both types of pancake have the same name: krampouezh. Pancakes cooking over wood fires are a familiar sight at many summer events in the region; there’s usually a bar nearby selling local cider to wash them down with. The galette should be thin and ideally a little crispy around the edges.

Crispiest of all, though, are crêpes dentelles: biscuits made of lace-thin sweet crêpes, often coated in chocolate. A wide range of these biscuits are made by Les Gavottes of Dinan. The sweet delicacies reputedly originated in the sixth century when a hermit, St Corentin, prepared them for King Gradlon, but their modern origins go back only to 1886 when Marie Thérèse Cornic made them in Quimper. Myths aside though, they’re a delicacy well worth seeking out!
- August 05, 2008