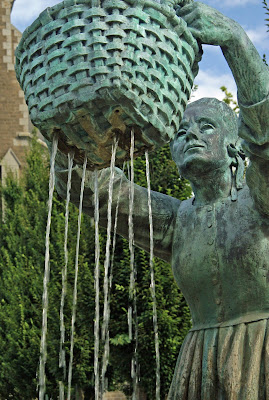 In 1892, travellers to Brittany were advised by the Hachette guide that a hotel in Brittany was unlikely to cost more than 7 francs a day including meals (since almost none of the establishments were first class!). However, these Victorian tourists were warned,

in certain localities ... the custom of the hoteliers is to serve oysters without price supplement, a custom which does not exist at Cancale, where on the other hand one can eat these molluscs all year round.

Nonetheless, the Cancale oysters were worth the extra payment for

their flavour, their fine shape and the depth of their shell. The animal is thick, without being voluminous; it keeps fresh several days ...

Indeed, the Romans were fans of the oysters, and Louis XIV had them brought to Versailles daily. The distinctive flavour is due to plankton specific to the bay of Mont St Michel. This shallow bay is also responsible for the design of a boat particular to the town: the bisquine, which is shallow-bottomed.

Oyster fishing was strictly controlled to protect the wild stocks – it took place once a year in an event known as the ‘Easter Caravan’ - but farming of the molluscs was also practised. Since the fishermen also took part in deep-sea fishing and were away for at least half the year, the main burden of selling the catch fell on their wives. At low tide, women and children would go out to the parks to collect and sort the shellfish. Hundreds of women were engaged in this work, and are now commemorated by a fountain in the middle of the town which depicts them rinsing the oysters in baskets.

Cancale remains famous for its oysters and has a small market on the sea front, the perfect place to try them with a squeeze of lemon and the scent of fresh sea air.