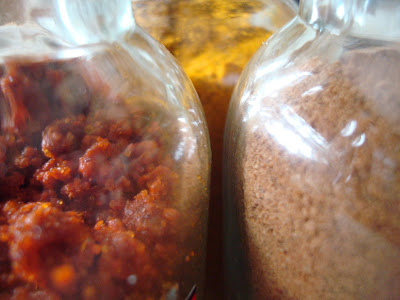 Classic French food isn't generally known for its use of spices, but chef Olivier Roellinger has made them an integral part of his cuisine. In doing so, he invokes the history of the Saint Malo area: the corsairs brought not only wealth but also spices to the region. They traded as the 'Compagnie des Indes Orientales de Saint Malo' - the Saint Malo East Indies Company - with cargoes of pepper, ginger, nutmegs, cloves, cinnamon and cardamom.

Based on that history, Roellinger has developed a cooking style which combines local produce, seafood and spices, and which has won him three Michelin stars. Roellinger's restaurant is in his childhood home, a malouiniere in Cancale where the famous corsair Robert Surcouf played as a child. Malouinieres are seventeenth- and eighteenth-century houses built by wealthy ship-owners who wanted country homes within a short ride from Saint Malo. Thus, they could enjoy the peace of the countryside away from the overcr

owded walled town, yet still keep a careful eye on their businesses. Although constructed in local stone, most of these houses are rendered; this, along with a high roof, gives them an elegant and distinctive appeareance. Many have dovecotes, chapels and formal gardens; some are open to visitors.

The restaurant is amazing, and fully deserves its renown. However, if you can't make it to Cancale for a meal there, you can buy Roellinger's spice mixes. Wonderful in their own right, they also evoke a lesser-known aspect of French culinary history.
- August 19, 2008

Now THAT has made me hungry! And perhaps considering a trip to Brittany....!