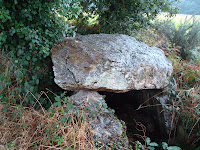 Not far from Langourla is a neolithic covered alley or dolmen, known as 'La Roche aux Fées' (the Fairy Rock) or 'La Grotte aux Fées' (the Fairy Cave). This name may seem rather unlikely, but according to local legend there were many fairies in the area who would come to the rocks at night and wash them in nearby streams. Perhaps they stole one of the rocks: the dolmen is unusual in not having a slab to cover its final chamber. 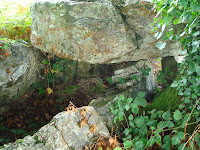 The dolmen was originally 14.5 metres long and over a metre wide, made up of 35 stones. Such constructions were used as tombs, and are found throughout Brittany (including the much larger Roche-aux-Fées in Essé). Even the name owes its etymology to a Breton term: taol maen or stone table. Nonetheless, the purposes and building methods of these stone monuments remain largely obscure. Today, many sit semi-neglected in farmers' fields; I had to disentangle myself from a few brambles to get these photos!

However, even more than dolmens, menhirs are the emblematic monuments of Brittany. The most famous are the vast alignments at Carnac, but menhirs appear throughout the region. The tallest in the Cotes d'Armor department is just outside the town of Glomel, near the Nantes-Brest canal; today it is tucked shyly between two houses. It stands 8.8 metres high and is characteristically shaped, with a slight narrowing at the top. Although the stone is local, moving it into position must have been a difficult task, since it weighs 83 tons. Even more than dolmens, the purpose of menhirs is shrouded in mystery: were they altars, monuments to important events, territorial markers, or linked to sun worship? The church was sufficiently concerned about them to christianise many, often by simply sticking a cross in the top! Meanwhile, the inhabitants of Langourla hoped to dig treasure from under theirs, leaving it with a decided lean...

You can explore many of Brittany's megaliths on this great site.