Suze is an aperitif distilled from gentian roots; it was invented in 1885 and officially launched in 1889, the year the Eiffel Tower was built. Since this advert was painted, advertising of alcoholic drinks has been severely limited by law.


Azur used to be France's most popular brand of petrol until 1968, when it merged with Total. From the 1930s to the 1950s, it contained one-third alcohol, one-third Benzol extracted from coal, and only one-third actual petrol - a sort of early biofuel. Azur also developed an extensive network of service stations in France; today, the garage 300m down the road has also disappeared:


Finally, a bit of seaside atmosphere. This advert is for a bar and restaurant in Val André where you can choose between ice creams and cocktails: 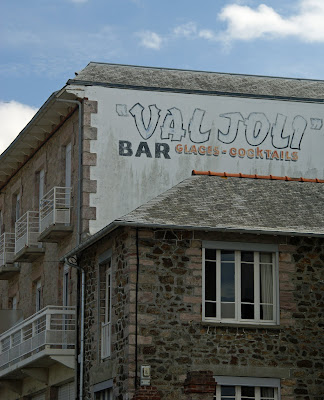