Just alongside Blackfriars Bridge is a series of pillars, ending with a rather grand crest and the name 'London, Chatham and Dover Railway'. Every time I've done a tour of London, the guide has offered a different explanation - most often they seem to think that the bridge was never finished. 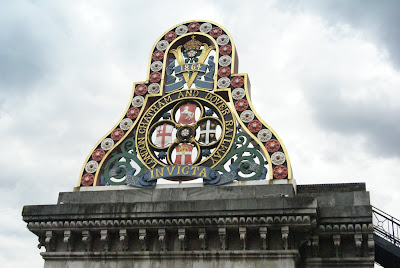 However, the bridge was in fact completed and opened in 1864 to take trains to St Paul's Station - now Blackfriars Station. From the 1920s, use of the bridge declined as much of its railway traffic moved to other stations. Finally, it was too weak for modern trains and the decision was taken to dismantle it as recently as 1985. Since removing the pillars risked destabilising the neighbouring Blackfriars Road and Railway Bridges, they remain in the river to mystify passers-by. 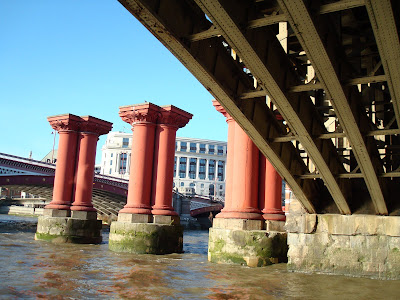 Dodgy bridges weren't the railway's only problem: it was also known for its poor carriage stock and poor punctuality. Its absorption into a new company in 1923 was therefore perhaps a welcome change! In fact, it had already effectively gone through a merger with its competitor, the South Eastern - which ran trains through Deptford - in 1899. However, to avoid paying the stamp duties a proper amalgamation would have incurred, the companies remained separate but were both governed by one Managing Committee which directed them and pooled their incomes. This tax-avoidance scheme remained in place for 24 years until the two railways, the Managing Committee, and various other lines formed the Southern Railway.
- August 28, 2008