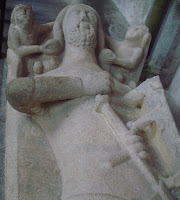 Jean V de Beaumanoir may look peaceful here on his tomb, but a nearby plaque explains that he suffered a gruesome death at the hands of Rollan Moysan and Geoffroi Robin on valentine's day 1385; they acted on the orders of Pierre de Tournemine. According to a contemporary description, Rollan killed him with two blows of an axe to the head. Jean's brother swore vengeance, and carried the body to the chapel at Lehon where it lies to this day.
Unfortunately, the plaque does not give any more of the story. However, Pierre fought a duel with Jean's brother the following year, while the Duke of Brittany and his court looked on. He obviously survived, because he went on to marry Jean's widow Typhaine who has her tomb in the same church. 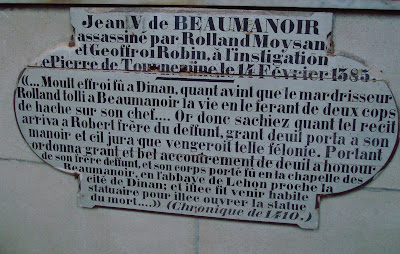