The Nantes-Brest Canal is both an amazing achievement and a failure.

First, the achievement. When the British blockaded Brest harbour during the Napoleonic Wars, Napoleon himself decided that a canal linking it to Nantes would minimise the impact of such blockades. Engineer Guy Bouessel planned the works, which lasted from 1811 until 1858. (The fall of Napoleon held things up for a while). Just over 360 km (224 miles) long, the canal crossed the sometimes hilly terrain of central Brittany with the help of 236 locks. 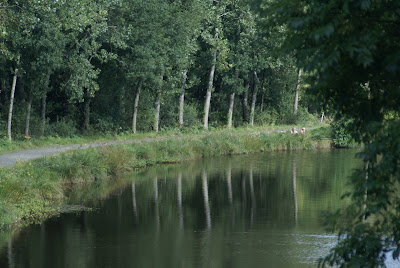 And the failure? By the time the canal was completed, the military need for it was gone: it would never serve its intended purpose. Even its peacetime use was limited, as railways took over much of the freight transport, although barges did carry wood, sand, slate, fertilisers and wheat. Worse was to come: the construction of the Guerledan barrage and lake in 1928 cut the canal in two. It even submerged 17 of the locks!

Happily, the canal has enjoyed something of a renaissance. It is now a popular holiday destination for pleasure boats and canoeists and, along the towpath, cycling and walking.
- August 21, 2008