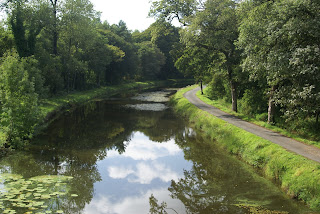 With a huge project like the Nantes-Brest Canal, one of the major problems was finding a workforce. Initially, with the Napoleonic Wars still raging, Spanish prisoners of war seemed to be the answer. Given poor living conditions and frequent epidemics, it's unsurprising that many of the prisoners deserted.
When construction began again after the wars, French convicts were used instead. In particular, prisoners from Brest and Belle-Ile were sent to the small town of Glomel to cut the canal into a hillside, creating 'the Great Cut'. The channel they had to excavate was over 3km long, 100m wide and 23m deep; they moved an incredible 3 million cubic metres of earth in 9 years. The forced labour was hard: digging out mud and earth using picks and shovels, carrying it away on foot, and spending the night huddled in primitive shacks built of mud and thatch. Working conditions were appalling and many workers died from epidemics, especially cholera. Even the hope of a pardon in return for their efforts was not enough to keep the men from revolting in 1830 and 1832. Eventually, in 1834, the camps were closed following a cholera outbreak and local people carried out the remaining work. Looking at the peaceful canal today, it's hard to imagine the misery involved in its construction.
- August 22, 2008