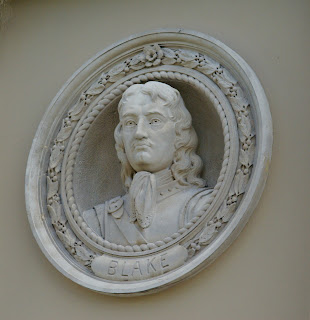 The answer is, he was simply appointed to it, as one of three commanders of the English Navy. Only one of the others had any naval experience, but that was no disadvantage at the time. The navy was still partly loyal to the royalists and not fully trusted, so putting army officers in charge of it seemed a good idea. Luckily, Blake adapted quickly and well to naval life, blockading the Royalist fleet that winter and then leading expeditions against royalist privateers in the Scilly Isles and Channel Islands. He went on to fight the Dutch; after that war ended, he went to the Mediterranean. While he was there, he attacked the Turkish fleet in harbour to secure the release of English prisoners.
Blake returned to sea again to blockade several Spanish ports, followed by an attack on Spain's treasure ships at Santa Cruz. The result would be the admiral's final victory - his health was poor and he wished to reach England once more before he died. In July 1657 he headed for home, but died as the ship reached Plymouth Sound. His body lay in state at Greenwich before receiving a state funeral in Westminster Abbey. Among his bequests were £100 for the poor of Bridgwater.
Blake's military victories are not all that matters about his career. He was also responsible for significant improvements to the navy such as promotions on merit, better welfare for sailors, and developments in techniques such as naval blockades, and he won the admiration of those he commanded. So why is he almost forgotten today? That's largely due to the restoration of the monarchy shortly after his death. Charles II had Blake's body moved out of the Abbey to a common grave, and there was a deliberate attempt to forget his achievements. However, they are still remembered in Bridgwater where the Blake Museum (his former home) has displays about his life and career as well as many other aspects of local history.
- September 29, 2008