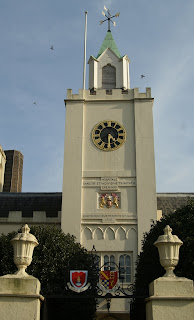 Almshouses are charitable homes for elderly people, an early example of social housing. They tended to cater either to a particular area or to a particular profession; the inhabitants also had to be respectable and capable of independent living. 'No common beggar, drunkard, whore-hunter, haunter of taverns nor ale houses, nor unclean person infected with any foul disease, nor any that is blind, or so impotent as he is not able, at the time of his admission, to come to prayers daily' was welcome at Trinity Hospital, Greenwich. Because of their age, many almshouses are beautiful, including the two I visited as part of Open House Weekend. Both of these, along with many others, are still operating today and provide homes for 36,000 people.
Although rules for contemporary residents are more relaxed, for much of their history almshouses set out stringent requirements for their inhabitants. Trinity Hospital imposed a daily timetable:

6am (8am in winter): rise, dress and say prayers.
9am: service in the chapel (or St Alfege Church on Wednesday and Friday).
Until 11am: free time (gardening and housework)
11am: lunch in the hall
3pm: church or chapel service, followed by free time ('weekly correction' on Saturday).
6pm: supper in the hall.
9pm: bedtime.

The gates were locked at 8pm (5pm in winter), but in any event residents could not leave the grounds without permission. However, that doesn't mean that life was miserable for occupants. First, the Hospital itself is beautiful, with gardens which retain their sense of peace even now that Greenwich's power station towers alongside. Similarly, the Merchant Taylor's almshouses are a tranquil green oasis beside Lee High Road. Second, communal life brought celebrations as well as discipline: two bowls of punch were drunk at Trinity Hospital to celebrate a new clock in 1841.

A chapel was integrated into Trinity Hospital's main building; Boone's Chapel was also central to life in the Merchant Taylor's almshouses, endowed by Christopher Boone in 1683. It has just been restored, and reopened three days ago for the first time since 1945. During restoration, a secret vault containing the coffins of Boone and his wife were discovered within it. 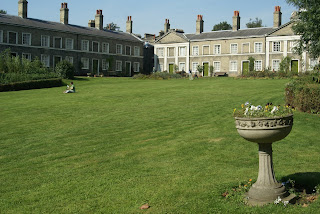 Boone was a wealthy wool merchant, originally from Taunton, Somerset. The founder of Trinity Hospital, Henry Howard, Earl of Northampton was from a very different sector of society: he was a favourite of James I and a Privy Councillor. Why did such varied kinds of people found almshouses? The reasons could be as complex and diverse as those behind acts of philanthropy today, but one clue is in the word 'alms'. It refers to acts of Christian charity, and at least part of the purpose in founding such institutions was to carry out one's religious, charitable obligations. Hence the centrality of the chapel to almshouse life.

Very nice article.
The Alms Houses are historically
interesting in South London.
Have you produced any articles on others in Greenwich or Lewisham?

I'm afraid I haven't yet. I do agree that they are really interesting.