Records of trials aren't just about legal history: they're full of social history too, so the Stratton brothers' trial in 1905 tells us as much about Edwardian life in Deptford as it does about fingerprint evidence. The participants in the trial ranged from humble to downright disreputable.
Work 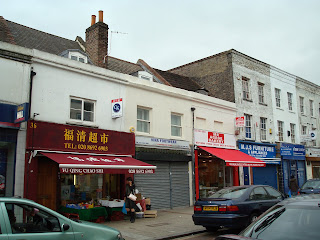 The victims, Mr and Mrs Farrow, had been respectable and hard-working. Mr Farrow was about 70, and had been with his employer for 24 years, but was far from retired. As manager of an oil and colour shop, his hours were long: the shop opening times were 8am to 9.30pm, during which time Mrs Farrow worked beside him. As if the shop day wasn't long enough, customers could call before opening-time in the morning (they were usually painters and decorators on their way to work), so Farrow would be fully dressed and smoking his pipe outside the shop door at 7am.

At the other end of the age spectrum, one of the witnesses was the milkman's boy - aged eleven, he went out on the morning rounds before going to school. Other witnesses included a professional boxer and a young woman who commuted into work by train.
Alfred Stratton had almost no employment history according to his brother, 'only about a month', and was known to the police who had 'tried to put that Brixton job on him, but they found out at the time he was at work.' Albert had been in the navy, but had a less than distinguished service record. He had deserted two years earlier; the police caught and returned him, but by the time of the crime, he had been discharged for about seven months.
Housing
Mr Farrow's job came with accommodation - he and his wife lived over the shop. Mrs Farrow's possessions were fairly modest: in the bedroom were two purses, one holding £6 10 shillings (equivalent to a few hundred pounds today, perhaps her savings), and on the dressing table was 'a box containing some brooches, a silver watch and things of that sort'.
The Stratton brothers lived in much more humble circumstances. Albert had lodged in the back parlour at 67 Knott Street (now Creekside) until a month or so before the crime. His former landlady, Sarah Tedman, had been widowed for ten years. She was a dressmaker and lived with her youngest son and his wife as well as her lodgers. Her son was a boilermaker, and was away working for a firm in Chiswick; his wife remained in the house and read the newspaper account of the murders to her mother-in-law.

Alfred and his girlfriend had the downstairs front room at 23 Brookmill Road. Some indication of the couple's means is given by the fact that they had argued about Alfred paying for a bath when Annie had no money to buy food; she said they 'lived in great poverty'. Indeed, the area was notoriously poor and rough. After leaving his lodgings, Albert had stayed for the last month or so at a London County Council lodging-house, Carrington House also in Brookmill Road. Herbert Lambert was clerk there; he described the area as 'a very poor district, and there are other lodging houses there - I believe there is one called Gaffer's - a lodging is called a doss and a kipp.' Indeed, Carrington House itself had been built in 1903 to replace a row of lodging houses described by John Coulter as 'the worst slums in Deptford ... patronised by criminals, prostitutes, and successive waves of destitute immigrants.' It had common rooms and cubicles for 800 men; today it has been converted into flats.
Relationships
While their victims were conventionally married, the Stratton brothers were rather less respectable. Alfred Stratton lived with a woman, Hanna 'Annie' Cromarty who was pregnant with his child; she described herself as 'an unfortunate'. She had recently come out of prison after serving at least a couple of months, although the trial record doesn't reveal her offence.When Detective Sergeant Frank Beavis came to arrest Alfred, he thought he was wanted for 'poncing' (pimping) for Annie. Domestic violence against her was treated as unremarkable: her evidence that 'Alfred and I had a quarrel [about a man], and I had a black eye' passed without comment, although at the time two female neighbours had looked after her and 'took [her] part against him'.

Meanwhile, Albert had lived in lodgings with a married woman as 'man and wife' until February. Their break-up may be explained by the fact he had since December 'kept company with' (gone out with) a domestic servant, Helen Black.

All very different from the prim and proper stereotype of the Edwardians!
- September 10, 2008