Deptford and the Old Bailey (1) 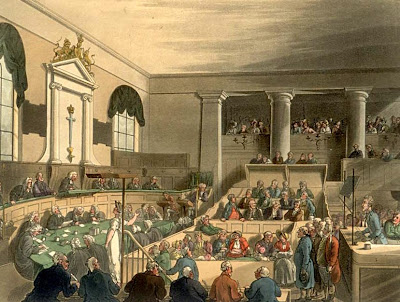 Thomas Rowlandson and Augustus Pugin, A Trial at the Old Bailey
Let’s take a break from murder but stick with crime. One of the great online history resources is Old Bailey Online – an amazing, searchable collection of reports on Old Bailey trials up to 1913. A search through these shows that Deptford wasn’t immune from crime, and George Inkpen was by no means the only inhabitant to make an appearance in the Central Criminal Court.

Back in the days when trials were shorter and defendants’ rights less carefully safeguarded, Richard Eaton was tried in 1681 for robbing a ship moored at Deptford of a bed, pewter, and 60 pounds of raisins. Although he claimed that he had bought the items in Chatham, he couldn’t prove it so was found guilty (no presumption of innocence there!).

When John and Ann Dicher were convicted of robbing a house in Deptford in 1682, he was branded but she was sentenced to death. The report is very brief and gives no explanation, but a possible answer is that John could plead ‘benefit of clergy’. Originally reserved for churchmen who were outside the jurisdiction of the secular courts, this procedure was eventually allowed to any man who could read or recite a particular verse from the Bible: they would then be spared the death penalty. However, you only got the benefit of this on your first offence; since there were no reliable central records, you were burned on the hand to show that you’d used it – the branding John underwent. Benefit of clergy was not generally available to women, leaving Ann to be sentenced to death.

Dockyards were always a magnet for crime, and Deptford was no exception. For example, when the naval ship Whitby unfixed its ship’s copper in 1784, two of the seamen stole the 90 pounds of copper and hired an unsuspecting waterman to take them and it into London. Both were found guilty and whipped.

However, in a reminder that Deptford was still a rural town, William Watkins had a horse stolen from his field in 1778 (James Durham was sentenced to death for the crime) while another victim of theft, Robert Edmunds, was a farmer and gardener (William Claved was whipped in 1789 for stealing his gardening tools).
- September 05, 2008