Eating out in Lyon

Barely back in London, and here I am in France again! This time it's for work, but I couldn't ignore the fact that Lyon is one of the great culinary cities so tonight I went out to the most Lyonnais of restaurants, a bouchon. 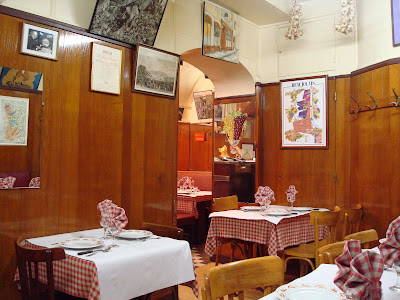 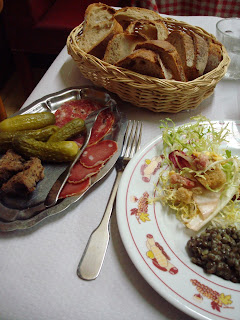 A bouchon is an informal, bistro-style restaurant serving local specialities. I went to one of the most traditional, the Café des Fédérations, 'founded a long time ago'. It's typically furnished: nothing glamorous or contemporary, just relaxed and homely with red checked serviettes, friendly service and a menu heavy on local dishes and ingredients.

Pig products feature heavily, and my aperitif came with a basket of pork scratchings. The starter was a huge assortment of charcuterie, lentil salad, and a salade lyonnaise with bacon, croutons and egg. The choice of main courses included boudin noir (black pudding) and apple, calf's head, andouillette (chitterling sausage) with mustard, and quenelle with prawn sauce. Hardly a vegetarian paradise, I'm afraid! I chose the 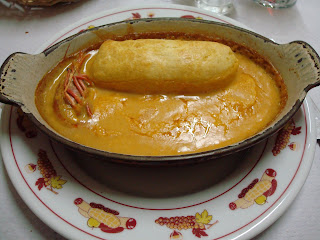 quenelle, which is a sort of fish dumpling and very much a Lyon speciality. It isn't pretty, but it is tasty. By contrast, the cheese plate was both pretty and tasty - although by this stage in the meal, I could barely scratch the surface of it! 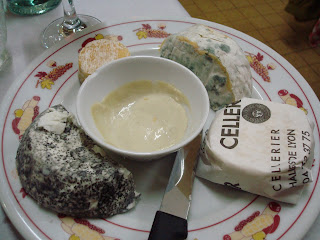 As well as having a great meal, I really enjoyed having the opportunity to experience an amazing bit of the city's heritage. With a few glasses of wine, it was also a lot more relaxing than museums and the like...

Email ThisBlogThis!Share to TwitterShare to FacebookShare to Pinterest
Labels: food and drink, lyon

Sounds lovely and very interesting. Will you be keeping us informed about other eateries you visit during your stay?

Oh, it's bread and water from now on! There may be the odd chocolate appearing though...

hope you don't rsort to bread and water. It was lovely to see such a typically french restaurant serving regional food. I wish you had tried the boudin noir (its what I would have chosen) so you could have commented on it. keep eating well - in the interest of research of course. Enjoy your stay in Lyon