Furnishing on the never-never

Jay's Furniture in Lewisham made no secret of its appeal: its large, bold 1950s advert on Clarendon Rise boasted that you could buy £40 worth of furniture and pay for it at just 4 shillings a week. (That meant you'd be paying for 200 weeks, or nearly 4 years - by the time the furniture was yours, it would no longer be very new). Such offers were by no means novel. Below is a 1930s promotional jug from Great Eastern Furnishing Stores in Stratford, advertising 'easy terms'.
Jay's were a national chain of furniture stores, whose expansion was based upon hire purchase. After the First World War, mass production of furniture was possible but most working-class households simply couldn't afford to go out and buy brand new furnishings. They relied instead upon second-hand or 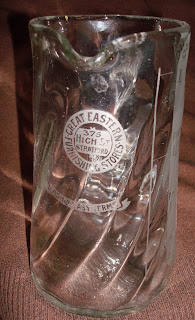 home-made furniture. To persuade them to buy new, two factors were important. The first was advertising - not only in the press but also through large adverts like the Jay's one. The second was financing: if they were to be able to splash out on furniture, it would have to be through hire purchase (already available for a few other expensive items such as pianos and sewing machines). Thus, offering credit was essential to the furniture industry's expansion. The 40-month repayment system was in place by the 1930s.

Unfortunately for the buyers, such credit had to be paid for. The mark-up could account for anything up to half the cost of the furniture. It included not only interest but also the administrative costs of the scheme - payments were often collected door-to-door. The high prices were often matched by low quality. It's no wonder that hire purchase tended to be seen as an extravagant option, even if it had become a very common one.

hmm, it seems nothing changes!

Yes, I was thinking of my credit card bill all the time I was writing!

Fascinating piece of research Caroline and one of the best signs I think that London has to offer. What a location!

Jays were a chain of furniture shops.
i beieve they also traded as Woodhouse,As you say they supplied
cheap furniture & HP and delivery as well,Like the rental telly co,s what would we have done without them.