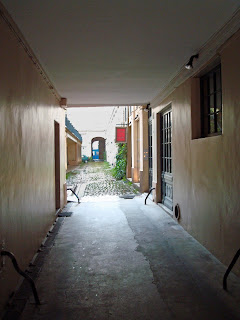 Lyon is famous for its silk-weaving industry (now almost disappeared). Traces of it are all over the city, particularly in the Croix Rousse district: for example, the traboules are narrow passages which allowed merchants to move silks from place to place under cover. During the Occupation, they were used by the Resistance to get around the city.
However, in the 16th and 17th centuries, France suffered a great deal of religious strife as protestants and catholics came into conflict. French protestants were known as Huguenots - and many of them were weavers. Their persecution reached a climax with the notorious St Bartholomew's Day Massacres of 1572 when public outrage triggered by the marriage of a French princess to a protestant led to the killing of over 2,000 Huguenots in Paris. The violence spread to other parts of France including Lyon. Life settled down again with the Edict of Nantes in 1598, which allowed them to follow their religion without persecution; but Louis XIV revived the pressure on the Huguenots to convert to Catholicism and revoked the Edict in 1685.

This led to a wave of emigration in which many French silk weavers relocated to England, where they brought new skills and techniques. (England hadn't previously had much of a silk industry: famously, James I's attempt to introduce one failed when he planted the wrong sort of mulberry bushes). A number of weavers settled in Spitalfields which fell outside the City of London, and so outside the control of the guilds. The weavers built homes and established a strong community; there were 9 Huguenot churches here by 1700. One of the former weavers' houses is now open to the public: 19 Princelet Street, London's museum of immigration.