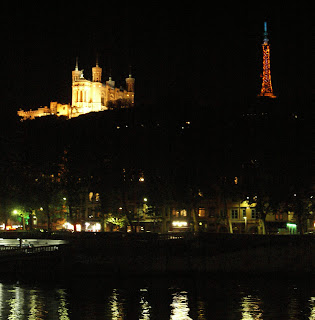 Blackpool isn't the only town to have a mini Eiffel Tower: there's also one overlooking Lyon, right alongside its Basilica. It was built in 1894 for Lyon's own Universal Exhibition and had an observatory and restaurant at the top. The attraction closed, and was nearly demolished, during the Occupation but survived to become a television relay tower. Sadly, the conversion involved removal of the lift and the tower is no longer open to the public.
It may not have much of a name - 'la tour metallique' (the metal tower) - but it is the highest point in Lyon, thus outdoing its neighbour which was built a few years earlier. This is no coincidence: the basilica's guidebook explains that for unbelievers, free-thinkers and republicans, the church was a provocation, a 'citadel of superstition'. A battle for height therefore took place - and the tower won by a few dozen metres.

Today both monuments dominate the skyline, by night as well as by day. The basilica, unlike the tower, remains open to visitors - and it's well worth going to look at the stunning, high Victorian interior. However, neither party would win prizes for subtlety. While the church might have lost out in terms of height, its giant golden statue of the Virgin Mary perched at the top made a pretty distinctive landmark. The statue is currently at ground level while its tower is being restored. 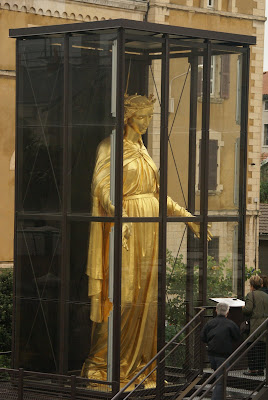 Prague also has a mini Eiffel Tower, on Petrin Hill overlooking the city.

Another reason to add Prague to my 'must visit' list!