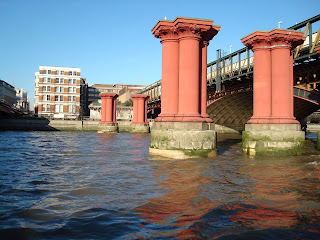 Blackfriars may have London’s only half-dismantled bridge, but there’s more to the area than that. It’s fairly well-known that the name came from a Dominican monastery, whose monks were known as ‘black friars’ due to their dark-coloured habits. Peter Ackroyd relates that many noble inhabitants of London were buried in the grounds wearing the order’s black robes because ‘to be interred in the habit of a Dominican monk was a certain means of warding off the devil.’ The monastery had even been powerful enough in the thirteenth century to persuade Edward I to bend the city wall between Ludgate and the river so that it enclosed their territory. Such royal favour was not to last: the priory was closed down in 1538 as part of Henry VIII’s dissolution of the monasteries. However, the site went on to prove turbulent for some of its subsequent occupants, real and fictional.
Later in the sixteenth century, a playhouse was built on part of the land. At first it was used by the master of Windsor Chapel to rehearse plays for the Queen - but in reality, paying performances were also held there and there were legal battles over alleged breaches of the lease. As a result, the playhouse closed down for a decade. However, it was later rebuilt by James Burbage – only to upset the neighbours. In 1596, they petitioned Parliament to close it because it would

be a very great annoyance and trouble not only to the noblemen and gentlemen thereabout inhabiting but also ... to all the inhabitants ... by reason of the great resort and gathering together of all manner of vagrant and lewd persons ...
(Quoted in Liza Picard’s Elizabeth’s London)

As a result, plays were not allowed to be performed. They soon reappeared though, acted by the Royal Chapel children once more. Eventually, adult performers returned: none other than the King’s Players whose members included one William Shakespeare. The residents’ concerns were not forgotten, and playgoers had to leave their carriages by St Paul’s or the Fleet conduit and walk the last part of their journey in order to keep noise down. However, the Puritans closed the playhouse down in 1642. It was demolished in 1655.
Another notorious inhabitant (albeit fictional) was Virginia Woolf’s Orlando, who lived through several centuries and changes of sex. Returning to his Blackfriars home after a century’s absence, he found himself the subject of lawsuits alleging he was either dead or a woman, ‘which amounts to much the same thing’. Of course, until relatively recently, that was often true: a single woman could hold property but would be unlikely to obtain much unless there were no male heirs, while a married woman had no separate legal identity and could not own property at all. Her every possession, however valuable or personal, belonged to her husband. Only in 1870 did the law begin to change...
- September 02, 2008